The Useless Information web site was created by me, Steve Silverman, in the very early days of the World Wide Web.  I never recorded the exact date that I started the web site, but I still have e-mail messages from 1995.  At the time there were only an estimated 25,000 web sites worldwide.

I am a science teacher at Chatham High School, which is located near Albany, New York.  I currently teach Physics and Earth Science.  I originally started collecting these stories as a way to make my classes more interesting, but little of what I research outside of school ever makes it into the classroom. 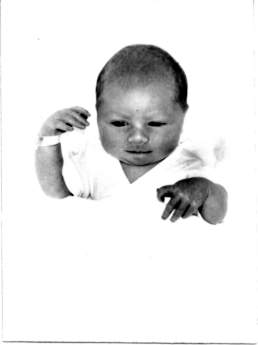 I was born in Brooklyn, NY.  That’s a picture of me at birth on the left.

When I turned eight years old, my parents picked up and moved to the boonies – the tiny town of Thompsonville, NY.  (Not too far from the site of the 1969 Woodstock concert).  Don’t drive through the town too fast – if you blink you will miss it. 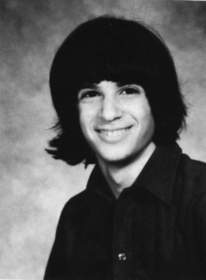 I attended the Monticello Central School district, but my solid B average and typical teenage lack of motivation assured that I would win no awards at the graduation ceremony.  (Unless you include perfect attendance in my senior year).  Check out my yearbook picture on the right. (You have to laugh at that one.)

After my high school graduation, it was off to college. I chose a real warm place – SUNY at Buffalo (in Buffalo, NY – where else?). Cold, windy, and snowy. Just like the weather in the tropics. It was here that I finally buckled down and became a serious student. I spent four years at the university studying the exciting field of Geology (better known as ROCKS! to the rest of the world). Personally, I have little interest in the actual rocks themselves. I am a big fan of glacial geology – studying the remnants of the past ice ages. If I had stayed at SUNY Buffalo, I would have studied existing glaciers in very warm places such as Alaska and Antarctica.

Here’s a picture of me with my dad Shelly at my graduation from SUNY Buffalo in 1985: 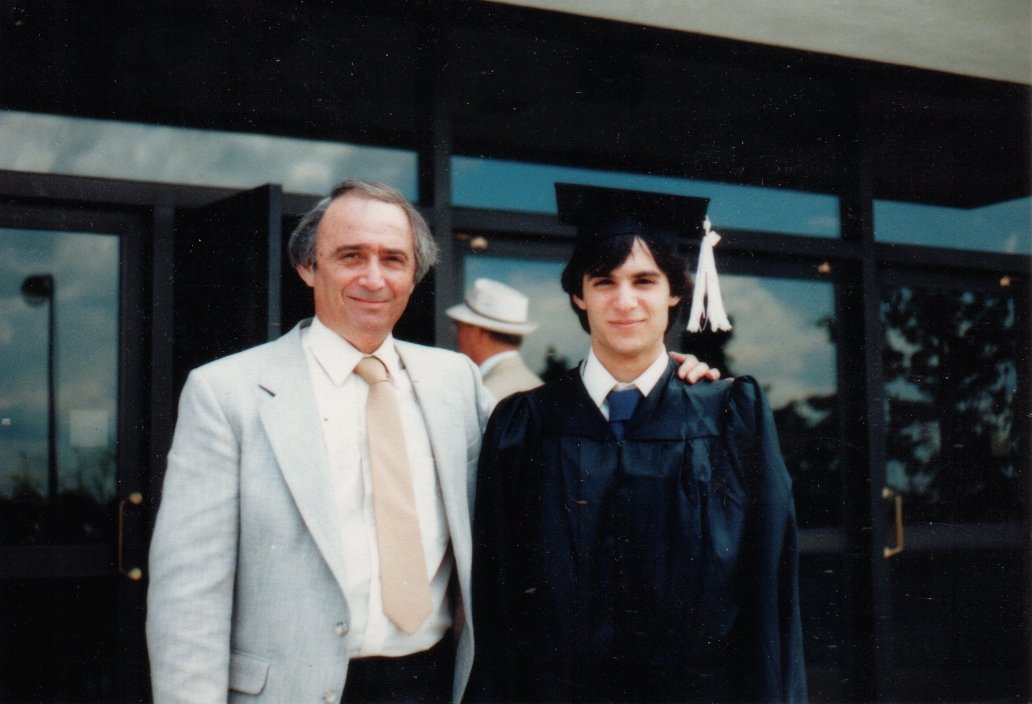 In what probably was an effort to avoid working in the real world, I headed off to grad school. My choice was close by – The University of Rochester. I spent two years there studying – you guessed it – geology! I was studying the rocks of the mantle of this great home planet that we call Earth. It was boooring. (I don’t think that I put enough o’s in…) I originally planned on getting a PhD, but decided to cut back to the Master’s level. It was a good choice, as I ended up serving as Chief Student Marshal (something like valedictorian) representing all of the Arts and Sciences Masters candidates at the graduation ceremony.

After graduation, I found out quickly that there were no jobs to be found in the geology field. As a result, I worked for two years as a combination sales engineer/marketing manager for a marketing company near my parents’ home. The company sold industrial controls which would require pages to describe. It had all of the hints of a dead end job, so I knew that it was time to move on.

I decided to go back to school to become a science teacher. I had saved enough money up to cover all my bills for a year of schooling. I attended SUNY New Paltz and received my New York State teaching certificates in earth science, chemistry, and general science. (I completed the requirements for my physics certification one year later.) After having studied for years in the hard sciences, I found the preparation for becoming a teacher incredibly easy.

I somehow went on only one interview and ended up as an earth science teacher at Chatham High School, a wonderful small-town school in upstate New York. Three years later I switched to teaching physics, although I typically teach one earth science class each year. It’s hard to believe, but I have been teaching been teaching for over twenty-five years now.

My favorite television show of all time is The Twilight Zone. I can’t say that I have seen all of the episodes, but I have seen quite a few. (I stayed up way too late in high school.) There were many excellent episodes, but I love Time Enough at Last. That is the episode where the late Burgess Meredith loves to read and read and read, but his wife constantly taunts him about it. While on his lunch break at the bank he works for, he goes into the bank vault for some quiet reading. When he comes out, he finds that the whole world has been blown to smithereens and that he is the last man alive. He now has all the time in the world to read, but in the typical Twilight Zone twist, his glasses shatter and he can no longer see the printed word.

I love to go to the movies. Among my favorites are The Shawshank Redemption, Rear Window, Psycho (I’m a big Hitchcock fan), and The Wizard of Oz. I can’t think of the worst. I guess I just put the bad ones out of my mind and forget about them.

So what do I do in my spare time? I spend a lot of my time reading. In particular, I love to read old newspapers. Years ago I had to do this by going to the library and loading up reels of microfilm, but now it is just a few clicks of a mouse button away at home.

Of course, I don’t limit myself to just reading.

In the summertime I love to ride my bike and go on hikes with my wife. For a good hike, I have been known to head down to Lake Minnewaska near New Paltz.

I am also an avid inventor. I’m sure that I have over one hundred inventions in various stages of development. Some are worth nothing and others are worth a fortune. My first invention, the Expandable Universe, is in the prototype stage. It is the first truly expandable enclosure for small birds, reptiles, small pets, plants, and small children (just kidding!). You can see it at ExpandableUniverse.com.

As for the books Einstein’s Refrigerator and Lindbergh’s Artificial Heart, that was just a fluke. You read all the time about authors that spend years trying to sell their manuscript. I took the complete opposite approach. I never even tried. Writing a book was the farthest thing from my mind. Then, a literary agent in New York stumbled across my web site and thought that it would make a good book. He contacted me, but I really wasn’t interested. My friend Barb, however, got on my case and had me call him. The rest just fell into place. Hey, I even got a full page in the National Enquirer from this thing.  You know that you’re something when you make the Enquirer…

Lastly, here’s a picture of my wife Mary Jane and me outside of our garage standing over one of her mutant flowers: 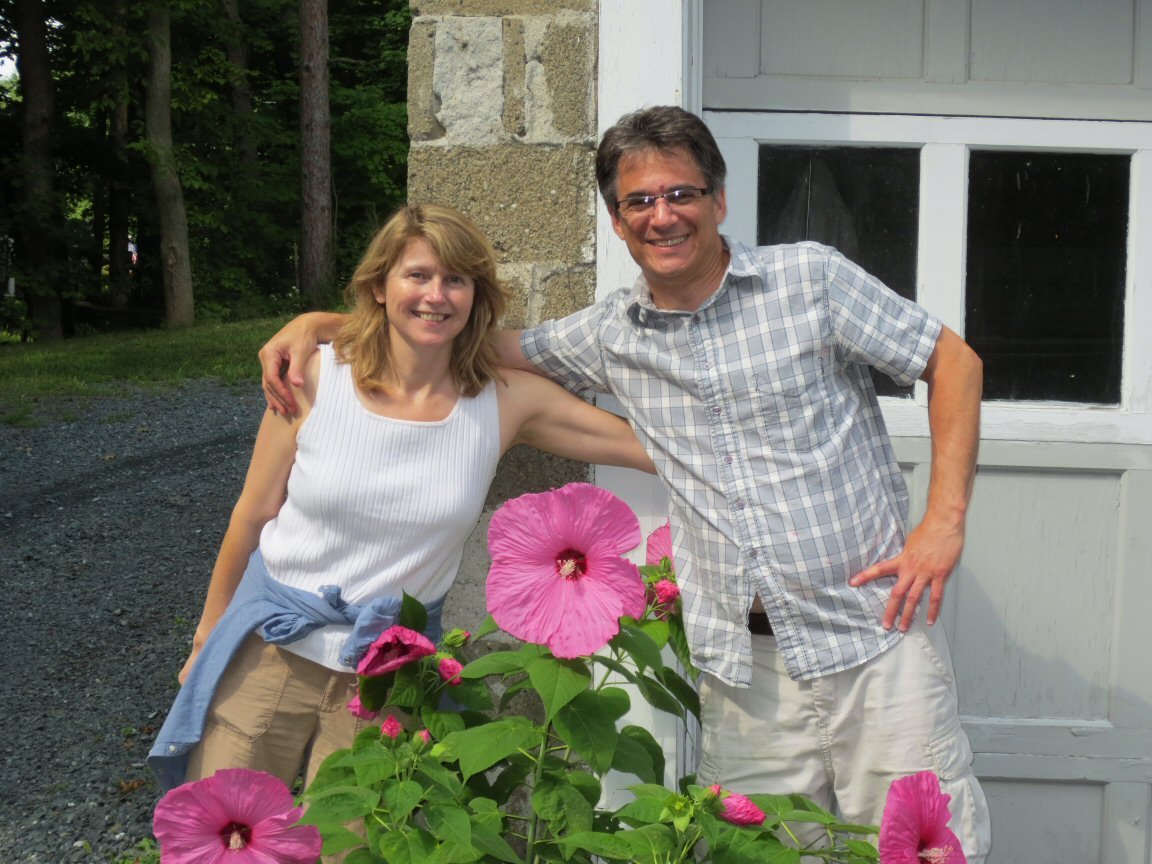 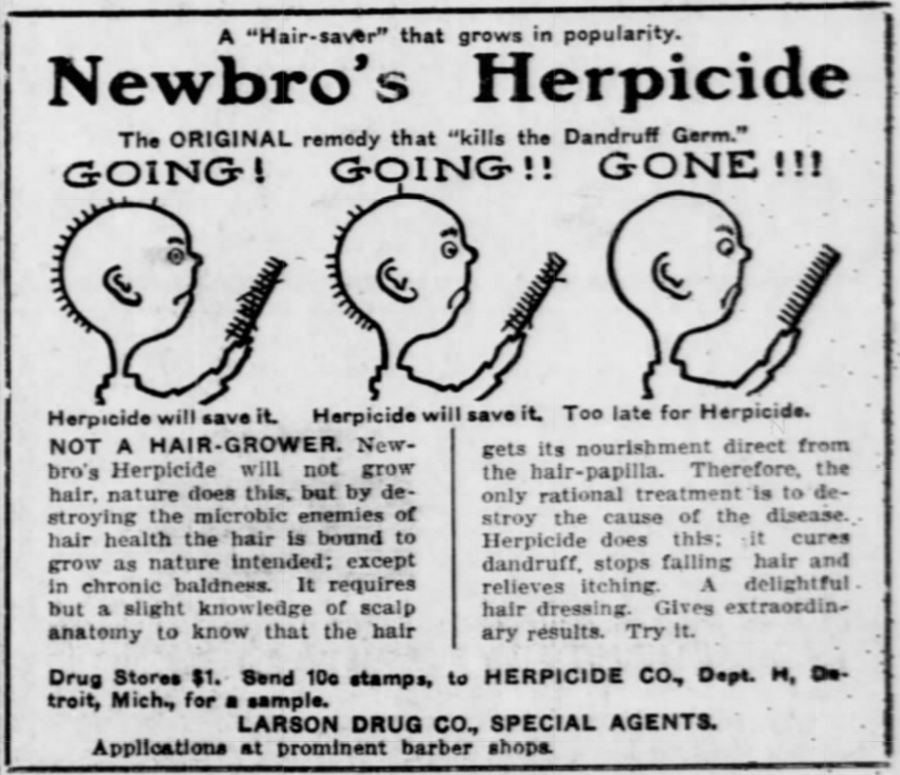