Albino Kangaroo Given to the United States

When I was a kid, if anyone mentioned the name Australia, the first thing that popped into my head was kangaroos. In fact, Australia’s national animal is the red kangaroo, the largest surviving marsupial in the world.

On May 26, 1952, the Associated Press ran a story that a 14-month-old kangaroo was being flown from Sydney to Washington, DC to be presented as a gift to President Harry Truman and the citizens of the United States. What made this kangaroo unusual was that it was an albino, the only one in captivity at the time. It had been raised by Edward J. Hallstrom, the president of the Taronga Park Zoo in Sydney, after it had been captured as a baby in its mother’s pouch.

The kangaroo’s name was kind of like one of those old Mad Libs, where one would insert a noun, an adjective, or a verb when asked. She was simply named Miss and it was up to the United States to fill in the remainder of her name. So, what would you name an albino kangaroo? Perhaps Miss Hoppity-Hop or Miss Skippy or Miss No-Name. Okay, those are really bad suggestions.

In a news conference with President Truman on May 29, 1952, reporters questioned him about Australia’s gift. Truman responded that he knew little about it other than the fact that he had seen the picture in the newspaper, read the little blurb beneath it, and that the kangaroo was on its way to the United States. He jokingly suggested that he would give the kangaroo to the press conference. When asked what he was going to name the kangaroo, he responded, “I haven’t seen the kangaroo. I don’t know whether it’s a lady or a gentleman. I will have to wait and find out.”

Clearly, the White House is not the ideal place for an albino kangaroo. As a result, she was turned over to Dr. William M. Mann, the director of the National Zoo. As for her name, Dr. Mann stated, “It’s called Miss Australia and in a week the boys at the zoo will be calling it Whitey.” 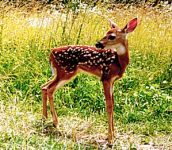 In 1965, Mr. & Mrs. John Ahlfeldt of Baltimore, Maryland were by their pet raccoon because a faulty fan was producing smoke.