It was reported on September 9, 1973, that August S. Claus, a pastor at St. Paul’s Lutheran Church in Fresno, California became a medical doctor after 45 years of part-time study.

Why did it take him so long?  Very simple: Lack of money.  When World War I ended, runaway inflation made the dream of attending medical school in his native Germany at the time.  Instead, he chose to accept a scholarship to a German seminary.

But he kept reading medical journals and studying in his spare time.  He then emigrated to the United States, accepting a position as a pastor in a small Nebraska congregation.  When the Great Depression hit, the church cut off his salary and he needed to get a part-time job to survive.

He finally ended up in California and resumed his medical studies part-time at the University of Southern California – USC.  He finally completed his medical degree with a three-month residency at the College of Medical Science in England – 45 years after he started studying medicine. 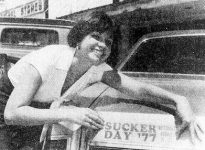 There’s that old saying that a sucker is born every minute. Take this story dated March 26, 1952, from Wetumka, Oklahoma as an example.

On June 25, 1923, a round of airplane golf was held at the Olympia Field Country Club in Chicago, Illinois. Could the amateur team beat the professionals?