Children Will Have Bugs Bunny Teeth

On April 7, 1949, Dr. George W. Hahn addressed a conference of approximately 4,000 dentists in Los Angeles with a dire warning: The laziness of modern mothers was causing their babies to get facial deformities and they will grow up to look like Bugs Bunny.

Basically, he had concluded that moms were pushing off their children’s feeding schedules, which was causing their teeth to protrude and were ultimately distorting their facial features.

Besides returning to a more normal feeding schedule, he also recommended outfitting your child with a pair of mittens made of coarse Turkish toweling to reduce that evil thumbsucking. 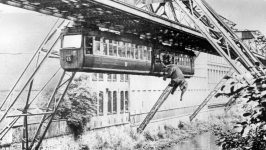 An incident that took place in Germany back in 1950 confirmed why one should never take an elephant for a ride in an elevated monorail.

A true story about 50 empty envelopes that were mailed from the Spokane, Washington post office.