You may or may not know this, but there is gold in the oceans. It was first discovered back in 1872, and even to this day, no one is exactly sure what the concentration is. There’s just too small of an amount to measure accurately. Estimates range between 5 and 50 parts per trillion, with the average estimate being about 13 parts per trillion. That is an extremely small amount.

And as a result, it is really difficult to extract it.

There have been attempts to do this. If you could extract the goal from the seawater, it’s estimated that there probably would be about $10 trillion U.S. worth of gold in the world’s oceans. It’s virtually impossible to harvest this yellow metal profitably. The concentration in the ocean is just too low, but that hasn’t stopped some people from trying, or at least convincing other people that they could do so.

This story goes back to 1897 and involves two men. The first was a Baptist minister from Edgartown, Massachusetts name Prescott Jernegan, and the second guy was his boyhood friend named Charles Fisher. Those are the only two names you need to know for the story.

The two of them ended up in the town of Lubec, Maine, which is the eastern most town in the contiguous US. You can’t go farther east within United States than Lubec, Maine. It’s a very remote place.

These two men claimed to have developed a new way to extract the gold from the seawater. Jernegan claimed that while he was sleeping, God told him how to do it and through repeated experiments, he was able to figure out how to get the gold out of the water. The process involved taking a zinc-lined wooden box, treating it with Quicksilver (Mercury), and then dropping it into the water and passing an electrical current through the apparatus. Basically, hook it up to a battery and the gold would absorb the Mercury. They would then pull the box up and there one would find some gold.

If you mentioned the word gold to anyone or indicated that you had struck gold, you’re going to attract some attention. People will invest money into your discovery. And, of course, they will want proof, and that’s exactly what Jernegan offered them.

Jernegan found the investors that he needed in a pair of wealthy parishioners. What he did was he had one of his so called “accumulator” boxes built exactly to his specifications. The parishioners, along with Jernegan, went out to the Narragansett Bay, and watched the box lowered into the water during low tide.

After one full title cycle, the box was pulled back up.  This proved that no one had tampered with it.

As a result, Jernegan and Fisher formed the Electrolytic Marine Salts Company in December 1897. They sold 350,000 shares at $1.00 each which sold out in three days. Now just giving idea how much money that is, in 2008 dollars, that would be about $10.5 million US.

By July, over 2.4 million shares had been sold. These guys were rich. This truly was one hot stock to own, but was it too good to be true? Anytime someone is pulling gold out of seawater, basically pulling gold out of thin air, one must question whether the methodology really works.

A Boston investment counselor had his doubts and decided to hire a chemist named Doctor Carmichael to confirm whether this was true. Carmichael went out to the Bay and randomly chose an accumulator to be test. Jernegan and Fisher were not permitted to influence it in any way, but Jernigan said when they pulled in the box that the accumulator needed to be stirred constantly. The water needed to be in motion.

Carmichael asked Jernegan to stick his hand in the water and keep stirring it manually. Carmichael then took the sample back to his lab and, to his surprise, he found that there were little bits of gold in the water. This confirmed to everybody that Jernegan and Fisher’s method really did work and the town of Lubec boomed.

Very shortly after, about 250 of the accumulators were built and the company was employing approximately 700 men. This was a big, big thing for a small, small town. These things really did appear to work because each of the accumulators was pulled out of the water, they were able to collect more and more gold.

Then, one day in July 1898, all of the 250 accumulators were found damaged and disconnected. In addition, Fisher had disappeared. Big shock, right? Jernegan claimed the Fisher went to Europe to open his own plant because there is a lot of ocean water in this world. You can’t be limited to just one plant in North America.

Jernegan offered to go to Europe and find Fisher. Soon after he left, it was discovered that Jernegan had withdrawn nearly $300,000 from his bank accounts and just disappeared.

Here’s how it all worked: It turns out that nobody knew that Charles Fisher was an expert diver. After the accumulators were dropped into the water, he would then dive down and seed them with gold.  Later, the accumulators would get pulled up and, to everyone’s surprise, there would be gold inside of the boxes.

How were they able to pull gold out of the accumulators over and over again?  There was a little trick to that also. As the gold was taken out of the accumulators, it would then be sent to a dealer in New York City. The dealer would pay money for the gold. But the same exact gold would then go back to Fisher’s house and be stored in a secret room there.  Then, finally, Charles Fisher would seed the gold back into the accumulators. The gold cycling round and round while these guys were milking their investors.

How did they trick the chemist? Remember: they pulled up a random box from the water and it had gold in it.  It turns out there was Quicksilver, which attracts gold, in the box. When Jernegan placed his hand in the box to stir it, no one noticed that he was wearing a gold ring. As he stirred the water, the gold was being removed from his ring and attracted to the Quicksilver in the box. It was all a bunch of trickery.

Jernegan ended up in Paris and arranged at $85,000 be sent back to the US to assure the confidence of the investors. Soon after it was discovered how this whole scheme worked, Jernegan was put on trial.  A court decided that the $85,000 was enough. Jernegan wasn’t required to return any additional money. In addition, he never had to serve a single day of jail time. He was free man, although his reputation was ruined.

No one knows what happened to the remainder of the money. But it is known that Jernigan died in Manila and he apparently died broke. It’s assumed that someone, most likely Fisher, took the rest of the money.

Fisher’s obituary appeared in an Australian newspaper in 1900. Although some people believe that Fisher penned it himself to avoid prosecution.

The Lubec electrolytic plant became a cannery for fish. The stockholders received 35-cents on the dollar, which wasn’t too bad considering that it was all one big scam.

Now like all good scams, someone else is going to try it. Sure enough, seven years later in England, in 1905, a company named Industrial and Engineering Trust Limited proposed to extract gold from seawater using its secret process, which was endorsed by the 1904 Nobel Prize winner in Chemistry, Sir William Ramsay. He discovered a few of the minor elements on the periodic chart, such as Argon, which he discovered with Lord Rayleigh, Neon, Krypton, Xenon, Radon. He was also the first to discover helium on Earth, although it had already been discovered on the sun. Yet, he was endorsing a scheme to extract gold from seawater just one year after he had won his Nobel Prize for his discovery of elements in the atmosphere.

I guess that a good hoax just never dies. 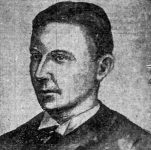 The crazy, true story of Jacques Lebaudy's attempt to build an empire of his own in the Sahara. 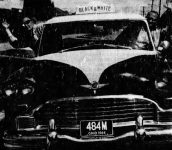 An offbeat story from 1966 about a woman requested that a taxicab drive her all the way from Toledo, Ohio to San Francisco, CA.