(This story originally appeared on page 1 of the June 27, 1935, issue of the Wahoo Democrat in Wahoo, Nebraska, and is reprinted word-for-word below.)

That was the experience of a family group at the home of Postmaster Fredericka Weber Friday evening when she again cut her wedding cake in honor of her anniversary.

The cake has been brought out at intervals since it first adorned the wedding table of more than a third of a century ago, and each time it was as sumptuous as the day it was baked. Yes, it is a fruit cake. To date we haven’t been informed definitely as to the preservative used, so your guess is as good as ours.

Present for the cake-cutting Friday were Mr. and Mrs. Oliver Adams and daughter, Joan, of Lincoln, and Mr. and Mrs. Carl Weber, city. (“City” is most likely Omaha.)

Tinker the toad was found buried under 6-inch thick concrete. The slab had been poured nine years earlier. Find out how Tinker survived this entombment. 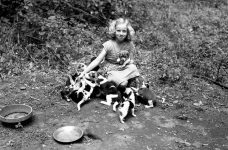 In 1957, seven of the friends of a 12-year-old girl from Detroit, MI became the new owners of puppies. Just how was she able to buy them all puppies?