(This article originally appeared on page 9 of the June 9, 1936, publication of the Ithaca Journal and is reprinted word-for-word below.)

Buffalo — Robert Ford, 42, recuperated today from an operation for a skull fracture.

Emergency hospital physicians all recuperated from shock and amazement when Ford coughed up a hefty roll of $11 after regaining consciousness following the operation.

Ford, police said, was attacked. They believe the injured man feared robbery and swallowed the money. 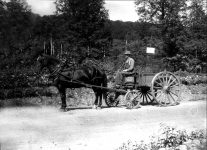 In 1930, Michael Filosa slashed his half-brother Salvatore De Hall to death while he was sleep-walking. Could he have really done such a thing?