And now for today’s story on Grady the Cow, which began on Tuesday February 22, 1949 in Yukon, Oklahoma.

The day started out like any other day on a 1280-acre ranch owned by Bill and Charles Mach, but quickly took a turn for the worse. Their 1400-pound (635 Kg) purebred Hereford cow named Grady was in labor and complications arose.

The local veterinarian, Dr. D.L. Crump, was immediately called into action. He tied Grady to a post and proceeded with the delivery. Sadly, the calf was stillborn. When he was all done, the vet untied the patient and she let loose.

Grady headed right for her owner Bill Mach, but he quickly jumped out of the way. Her horn grabbed hold of his shirt and tore a hole in it, but he was unhurt. But there was one problem – Grady had mysteriously disappeared. The two men took a quick look around and realized there was only one place for her to go – that big, gigantic mammal had somehow forced her way through the tiny door of the barn’s silo. When I say tiny, I mean tiny, at least for a cow. The opening was a mere 17 x 25-1/2” (43 X 65 cm), which is a bit larger than a page from the NY Times or the Wall Street Journal. It’s hard to imagine any cow getting through such a small opening. I can just imagine the look on their faces when they realized where she was.

They looked into the silo and Grady seemed just fine, now that now she was confined to a concrete cell that was only about twice her length in diameter. Now the big question was how to get her out.

And this is where the media enters the picture. The editor of the local Yukon Sun newspaper heard the story and did not believe it at first. He went to the farm to investigate. Once he confirmed that Grady really was stuck in the silo, the story was quickly picked up by the wire services and appeared in newspapers all over the world. One picture showed Grady peering out through the door opening, while another was taken from above with an excellent view down the silo column.

Phone calls, telegrams, and letters with suggestions on how to get the cow out started to pour in from around the country. The Bangor Daily Commercial held a contest for people to submit their best ideas for getting Grady out. The Toledo Times appointed someone to be the cow editor and sent ideas to the Machs. Bill Mach later stated that he received hundreds of different suggestions from 44 or 45 states – not too shabby if you consider that there were only 48 states at the time.

The most common suggestion was to simply make the door opening larger, but the frame of its steel door was anchored into concrete blocks. Also, there was concern that an enlarged opening would weaken the structure of the silo as a whole and could all come crashing down on Grady and the men working inside. Not to mention that Grady probably would have freaked out from the noise of the jackhammers. The Associated Press contacted the manufacturer of the silo – the Interlocking Cement Stave Silo Company – and their President said that while a layman could not do it, their technicians could take out a number of the staves and replace them without any damage to the silo.

Another alternative was to simply rip the silo down to the ground, but the cost to replace it far outweighed the value of the cow. This idea was quickly shot down.

Or how about lifting the cow out? They discussed the possibility of bringing in an oil derrick and setting it up over the silo. But once again, the cost to do so was way too high.

A US Air Force officer suggested the use of an Army helicopter to pull the cow out, which was certainly doable. We see helicopters today lifting far much heavier things like cooling units up to the rooftops of buildings, so a cow should be no problem. But for some unknown reason, that plan never materialized.

As you have probably guessed, there were those that suggested she just stay in there for the rest of her life in confined to that concrete prison. And, yes, there were those that thought she should just be butchered right there on the spot, but her owners wanted this cow out of the silo. Valued at $1000 (about $9000 bucks today), Grady was worth a lot more alive than dead.

Oklahoma’s then Governor Roy J. Turner even chimed in with his suggestion – just drug her until she is feeling no pain and push her out through the opening.

Five days after Grady forced her way through the tiny opening, the vet and her owners gathered, along with a crowd of 40 onlookers, to get her out of there. Ralph Partridge, the farm editor from the Denver Post, offered what they considered to be the best solution and flew in to offer his assistance. First, a ramp was built from the floor of the silo to its door. Next, Grady, the silo door and its frame were heavily lubricated with about ten pounds of axle grease.

Her forefeet were placed through the door opening and the vet jabbed her with a hefty dose of the sedative Nembutal. Some men pulled forward with ropes while others pushed from behind with all their might. A truck with a power winch stood by but proved to be unnecessary. With what must have been one mighty large heave-ho, Grady reemerged into the world through the same small door that got her in this mess in the first place.

Ah, the sweet smell of freedom. I just never realized that it smelled like cow manure. Okay bad joke.

The vet examined her, and everything seemed fine at the time. But it turns out that Grady did not fare as well as was originally thought. They concluded that she must have been injured on her way back through the opening. The patient was placed in a stall and wrapped in horse blankets for warmth. Her diet consisted of a nutritious blend of ground corn and oats, alfalfa hay, and cottonseed cake cubes. Yummy, yummy, yummy…

She did recover and made her first public appearance on April 21st at the ‘89er day parade in Oklahoma City. Thousands of people watched her go by, but Grady was uninterested.

She became a bit of a tourist trap and people traveling on the famed Route 66 highway made a slight detour to get a look at the famed cow.

Fame also allowed her to breed with the finest of gigolos. Her new boyfriend was the blue-ribbon bull named Hi-Tone the 32nd, who was valued at $5,000 – five times Grady’s price.

It also brought in tourists. For many years after her rescue was made, tourists stopped by to see the famous cow in her pen out near the road.

If you plan on going to visit Grady, don’t bother. Cows just don’t live that long. Sadly, Grady the cow passed away on the evening of July 24th, 1961. She was 18 years old and simply died of old age. During her lifetime she had given birth to six calves, four female and two males.

You cannot even go see the famous silo. It no longer stands, having been torn down in 2001 to make way for the construction of a regional hospital. 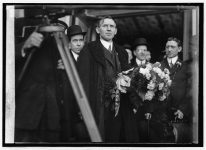 Millionaire for a Day – Podcast #99

What should a political party do if they do not want the winner of the primary on the ballot? Butch McDevitt was such a man back in 1911. 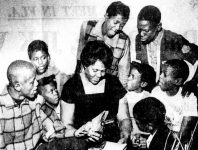 The heartwarming true story from the 1950s of a secret Santa and the generous Christmas gifts that he gave to Helen Arnold's family in Akron, Ohio.