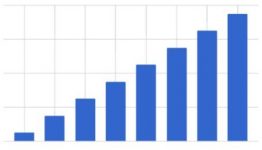 From a study of infertile women, Dr. Erwin O. Strassman concluded in 1964 that women with smaller breasts are smarter.