And now for today’s story titled Jack the Stripper. This is a story that I stumbled upon a few months ago and I found it to be an amusing one.  I hope that you enjoy it also.

The story started making national headlines during the month of February way back in 1960.  When I first saw the headline “Jack the Stripper Prowls San Diego”, I made the immediate assumption that some guy was flashing others around the city.  But I was wrong.  Oh so wrong…

The bandit dubbed Jack the Stripper by the city police pretty much had the same modus operandi every time.

Take, for example, the crime that he committed on the evening of February 21, 1960.  That was a Sunday if you are curious.

It was on this day that the gunman, donning a rubber Halloween mask of a woman’s face, walked into the bar at the Crest Inn and demanded all of the money from the cash register.  He then asked all of the men, all four of them – I guess it was a slow night – oh, and that included the bartender – it was a really, really slow night – to dump their wallets on the bar and locked them in the restroom.

Now I know that this sounds like the type of crime that is committed somewhere in the world every single day, probably every hour.  But, as with all of the stories that I tell, this one has a twist.  You see, Jack the Stripper always makes all of the women present at the bar strip naked.  He then leaves with all of their belongings.  On this particular night, the one lucky woman happened to be a 30-year-old barmaid named Jacqueline Joan Cantu.

If you were in her position, what would you do?  Scream?  Run for your life?  Not Ms. Cantu.  She simply said “Oh, no, not again”, to which the bandit replied “Yes, mam.  Just like before.”

He wasn’t dubbed Jack the Stripper for no reason.  As you probably guessed, Ms. Cantu had to disrobe both times.  This time she was taped to the table.

Now’s a good time for a joke.  A guy walks into a bar and orders a beer.  The bartender happens to be wearing a rubber Halloween mask.  And, there is a naked woman taped to one of the tables.  What did the customer observe?  Answer:  Absolutely nothing out of the ordinary.  The only problem is that this was not a joke and really did happen.  Afterward, the witness told the police “I thought she was a mannequin, and that a masquerade party was going on.”  I have no evidence to support my hypothesis, but I can only guess that this witness, if you can call him that, was as drunk as a skunk.

Just four days later he robbed Tommy’s Tavern for the fourth time.  I just can’t help but wonder where the police were in all this – it doesn’t take a genius to figure out which establishment he was going to rob next…

Anyway, I diverge from my story.  Here he is robbing Tommy’s Tavern for the fourth time.  One female customer, a Mrs. Delorie, freaked out when she was ordered to strip.  Refusing, the bandit started ripping off her blouse.  Having no other choice, she ultimately took all of her clothes off.

A waitress named Geralet Stoner had been forced to disrobe two other times before, so she did the wisest thing possible: she had her schedule changed so that she could work the day shift instead.  She figured that since the bandit was a creature of habit – always robbing in the wee hours of the morning – she would be safe.  That almost worked, except that on this particular evening she had been at Tommy’s celebrating her birthday.  I bet she never planned on spending her birthday wearing her birthday suit, if you know what I mean.

While his shtick might have seemed incredibly predictable and monotonous at this point, his escape didn’t go well this time.  He took the keys to a customer’s pickup truck and sped away.  That’s when the bartender, a guy named Frank Caslow, grabbed a .410 gauge shotgun from behind the counter, took aim, and fired at the escaping criminal.  Caslow’s aim was dead-on, striking the truck’s rear window right behind Jack’s head, but the blast was not powerful enough to do any damage.

Meanwhile, a customer named Jerry White jumped in his own car and chased after Jack.  About two blocks from the robbery, Jack abandoned the pickup and fled on foot.  White, armed with a pistol took aim at the fleeing robber and fired two shots.  Both missed their intended target.

A total of fourteen police cars, six from the Chula Vista Police Department and eight from the San Diego County Sheriff’s Office, hunted for Jack.  They were too late.  Jack got away this time, but just barely.

Jack was described by police as being around 40 years in age, 6-feet tall, and weighing somewhere between 200 and 220 pounds.  During each robbery, he was always polite, made sure to cut the phone line, and never touched any of the women that he forced to disrobe in an inappropriate way.  It was theorized that he left the ladies in the nude to inconvenience them so that they couldn’t call the police.  This backfired a bit during one robbery when someone called the police to let them know that a naked woman was running up and down the street screaming at the top of her lungs.  By the time police arrived, Jack had a 15-minute lead over them.

The press was having a field day with this story.  The March 7, 1960 issue of the Titusville Herald joked “Jack the Stripper, the San Diego bandit really puts some truth in the girls’ long-standing complaint: ‘But I don’t have a thing to wear!’”

And this is where the story of Jack the Stripper fades from the headlines.  There was a story on March 17th about a robbery at a store named Jay’s Display.  The thief ordered a young clerk to disrobe before hitting her on the head and stealing $500.  The police dismissed this as a copycat crime since our Jack was never violent and only held up taverns at night.

Fast forward to October 11, 1962.  A man entered a South Gate, California bar owned by 25-year-old divorcee Arlene Van Note around 2 AM and asked for a beer.  He then pulled a gun and announced that he was holding up the place.  $55.00 was taken from the cash register.  As you could probably guess, the robber asked Ms. Van Note and the bar manager, 35-year-old Joan Bagley, to remove all of their clothing.

“I’m Jack the Stripper,” he was quoted as saying, “I make my living this way.”  He supposedly threatened to rape Ms. Van Note, but then said “Aw, put your clothes back on.  I don’t like women anyway.”  Ms. Van Note put her clothes back on and was then forced to tie up the still nude Ms. Bagley.

Then Jack did something that had not been done during any of the previous robberies.  He took Mrs. Van Note as a hostage and they used her car as the getaway vehicle.

Eight hours later the two were almost 300 miles away from the scene of the crime at the Desert Inn casino in Las Vegas.  Mrs. Van Note whispered to a change girl that she was being held as a prisoner and that the man she was with was armed.  The police were alerted and they descended upon a room at Tam O’Shanter motel that he had rented on the Vegas Strip.  Maybe it’s just me, but I find it a bit humorous that Jack the Stripper was finally caught on the Vegas Strip.

They arrested Bobby Ray Watts, a 25-year-old, 6-foot tall employee of a Huntington Park, California furniture company.  He was ultimately charged in federal court with kidnapping and interstate transportation of a stolen vehicle.

The judge in the case dismissed the charge on the stolen vehicle because the indictment handed down failed to mention that the car used was stolen.  Watts’ lawyer also challenged the kidnapping charge, claiming that the indictment failed to state that Mrs. Van Note was being held for ransom or reward.  I don’t know about you, but I consider kidnapping to mean being held against one’s will, not whether or not a ransom is asked for.

On January 12, 1963, after thirteen hours of deliberation, the jury of twelve men was unable to reach a verdict in his trial.  On April 8th, after a 4-day trial, the jury found Bobby Ray Watts innocent on the kidnapping charge.  He was now a free man.  A spokesman for the jury said that there was reasonable doubt that Mrs. Van Note had been forced to cross the state line into Nevada.

I should point out that Bobby Ray Watts claimed that he was Jack the Stripper during this particular robbery, but appears not to have been charged with any of the other prior robberies, so either the police lacked the evidence tying him to those crimes or he was another copycat.  Around the same time, another guy named Jack Wilkerson, who was also nicknamed Jack the Stripper, was arrested for a similar string of robberies in Chattanooga, Tennessee.  And then there was the infamous Jack the Stripper murders in London between 1964 and 1965 that took the lives of six to eight women. 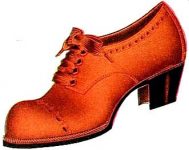 A 106-year-old woman seeks a husband, 5 phonograph records is admission to a dance, Australia gives the US an albino kangaroo, Johnny Cash promoting the Home Equipment Co., A country could be 49th US state, and more!