Now I am sure that you have heard that everyone has a twin out there, somewhere, someplace. You know, someone that looks just like you. For those old enough to remember, think Carol Burnett and Vicki Lawrence. And you know ABC News anchor George Stephanopoulos? I have been stopped several times by people thinking I was him. No clue if I really look like him, but I can tell you this – I am the better looking of the two of us – at least in my wife’s eyes.

Today’s story is somewhat similar but does have a bit of a twist to it. It’s another story of two men that looked so incredibly similar that they were dead ringers for one another.

The first character in our story is a man named Lawrence Joseph Bader, a 30-year-old salesman for the Stainless Steel division of Reynolds metals. The son of a prominent dentist, Larry was the typical husband in the typical 1950’s household. He was happily married with three children that he adored, plus his wife Marylou was pregnant with their fourth. He had a $17,000 mortgage on his Akron, Ohio home, which was quite affordable on his $10,000 per year salary.

But that was all about to change. On the morning of May 15th of 1957, Larry told his wife that he had to deal with some bad checks from some business transactions and that he was probably going to go fishing after that.

Being an avid sportsman, Larry rented a boat from a livery on the Rocky River near Cleveland and left the dock around 4:30 PM.  Storm warnings were up, but the water was calm. Larry had planned on being out on the boat for about two hours, and the storm wasn’t predicted for three, so he was certain that he could get back safely in time.

Sadly, he did not. The next morning, his boat was found washed up on the rocks at nearby Perkins Beach. The Coast Guard never found his body and said that the water had been so rough, that there was no way that the young husband could have survived. Five years later Larry was declared legally dead by the judge presiding over the case.

Now the second character in our story was the complete opposite of the late Larry Bader. His name was John Francis Johnson. He worked for KETV in Omaha, Nebraska as their sports director. Popular and incredibly flamboyant, he was simply known to the public as Fritz – he never used his last name.

And Fritz was a bit of an odd duck. He was well known around town for owning a hearse that he outfitted with a coffee table, bar, and pillows. It was rumored to have been used for gambling, but when the police raided it, they found no conclusive evidence. Instead of placing the actual date on the checks, he simply wrote Winter, Spring, Summer, or Fall. Fritz had even spent one-month perched on top of a flagpole in an effort to raise funds for polio.

Fritz was known to be a social butterfly and had a reputation for being quite the lady’s man, but he was, in fact, happily married. On April 11, 1962, he married a former model named Nancy Johnson. They had two children, one that was conceived during their marriage and a second that Nancy had from a previous marriage. There was a big age difference between the couple. He was 36 and she was 22 when they tied the knot.

One other thing that Fritz had going for him was that he was the Nebraska state freestyle archery champion. He had successfully defended the title twelve times, one of them just 3 short months after having an eye surgically removed due to a cancerous tumor that was behind it.

Fritz was so good that the Sanders Archery Company of Columbus, Nebraska sent him in February of 1965 to Chicago’s McCormick Place to demonstrate the firm’s new equipment at a sports show.

And this is where the lives of the late Larry Bader and sportscaster Fritz crossed. A man from Akron was visiting the show and did a double-take – Fritz was the spitting image of his friend Larry Bader – his body double.

Could Fritz and Larry Bader be one and the same man? Just quite possibly – since – get this – Larry Bader was also a championship archer.

The friend then called two of Larry’s brothers and told them what he observed. He then went up to Fritz and told him of this amazing coincidence. Fritz was incredibly cooperative. He said that he had no idea who Larry Bader was and even agreed to be fingerprinted and to meet the two Bader brothers to prove this.

And that is exactly what happened. Both Omaha and Chicago police took Fritz’s fingerprints and sent them off to the FBI. They were compared to a set of fingerprints that Larry Bader had made while in the US Navy and – as you have probably guessed – BINGO!!! – they were an exact match. The late family man Larry Bader and the sportscaster Fritz were one and the same.

That was good enough for this story to capture national headlines in early February of 1965, but Fritz still continued to maintain that he no recollection of his previous life as Larry Bader. He had no clue who his first wife was. No memory of his first three children. No recognition of own mother. Nothing. Nada.

Not that people didn’t try to get him to change his story. His two brothers, who tried to catch him in a lie with trick questions, became convinced that his prior memory was totally wiped out.  He spent a week undergoing tests in an Omaha hospital, which included so-called “medicated hypnosis”, and doctors concluded that he really didn’t have any knowledge of his former life in Akron. While some suspected that the cancerous tumor or boat accident may have had something to do with this case of amnesia, the doctors could not find any medical reason for it.

The pieces of the story started to come together. It turns out that 7-days before his supposed drowning, Larry Bader had taken out a $7,000 life insurance policy with double indemnity. It was also learned that he had not paid any income taxes in the five years prior to the accident. He owed $3,789 – that’s about $30,000 in today’s funds, which his family paid off in 1958.  Very suspicious, huh?

Three days after the boating accident, he made his first appearance as Fritz Johnson at the Roundtable Bar in Omaha. He was well dressed and had the nerve to ask the girl behind the bar out on a date. Shortly after that, he was working as a bartender in Ross’s Steakhouse when a radio executive heard his voice and suggested that he try out for an opening at KBON radio. From there, it was on to his TV gig. And he enjoyed his new life as Fritz Johnson for as long as he could – for 7 years and 9-months.

As you can imagine, Fritz was in an incredible web of legal problems. He was married to two different women at the same time. He wasn’t providing child support to his first four children. His first wife had received $39,500 – that’s over $300,000 today – in life insurance, $254/month in social security benefits, and $125/month as a Navy widow. An Akron judge brought Larry Bader back to life on February 19th of 1966 by ruling that he was legally alive and married to his first wife. And now that her husband was alive, would all of that money have to be paid back?

I have to say that Fritz handled the whole situation honorably. First, he promised not to divorce his first wife and to figure out a way to support her and the four kids. Under Nebraska law, since he was married before, his second marriage was automatically considered void.

Sponsors did not want to have their businesses associated with him, so Fritz was forced to leave his job at the TV station because. As a result, Fritz went back to work as the head day bartender at Ross’s Steakhouse, while continuing to do radio announcing in the evening and on weekends. He sent $50/week back to his first family in Akron and the court ordered that he had to provide $20/week to his second family.

With no place to live, he was forced to move into the local YMCA in Omaha. Fritz visited his second wife and children daily. He said that he was still morally married to Nancy, even if the law said that he wasn’t. Fritz was unable to support them, so Nancy became a reservation clerk at United Airlines. This sudden fame brought her hundreds of letters of support, which included nine marriage proposals.

But, Larry was in far worse trouble than anything that the law could throw at him. About a year after this whole mess started to unravel, he learned that he was suffering from terminal liver cancer. He died on September 16, 1966, still denying any knowledge of his previous life. Larry Bader, aka Fritz Johnson, was just 39 years old. 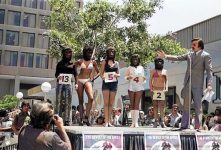 The Case of the Hollow Nickel – Podcast #168

In 1953, paperboy Jimmy Bozart was counting his subscription money. He dropped the coins and one nickel split open, revealing a piece of microfilm. This led to the arrest of a high-ranking Soviet spy.