Today’s story begins in New York City with the failure of the marriage between Rose and Frank Laiken way back in 1928. Frank, an East Side furrier and real estate dealer was ordered by the court to pay his wife $200 per week alimony. (That is about $2,400 per week today.) In response, Frank threatened to leave the country and head back to his Russian homeland, where he claimed that “husbands have some rights”. Of course, if he did leave the country, he would not be able to pay the alimony and the court ordered him placed under a bond of $25,000 in value.

$25,000 is a huge chunk of change, even by today’s standards. But Frank was reportedly a very wealthy man, with estimates of his fortune being more than half-a-million bucks. And this is when Frank Laiken seemed to vaporize right off the face of the Earth. He was never to be seen again.

But Frank had one distinctive feature that made it difficult for him to hide. You see Frank had a wooden leg. Rose made some inquiries to contacts in Europe, but no one had spotted him.

Around the same time, a Polish Jew with one leg named Noach Goldberg checked into a Vienna, Austrian hotel, but he did not stay long. He became ill and was taken to a hospital, where he died on October 31, 1928. The $600 or so dollars found in his possession were used to pay for the hospital and funeral expenses.

The Polish consul in Vienna arranged for Noach’s funeral and arranged for all his possessions to be taken from the hotel to the consulate. There was not much there – just an old pile of clothes, an additional $100 or so, and his wooden leg.

Somehow Rose learned of Noach Goldberg’s death and based on the details she received, she became convinced that Noach Goldberg and her estranged husband Frank were one and the same people. His family back in the US told the consul that he had left the US with a large fortune and asked him to search through the luggage more carefully. The supposed fortune could not be located. Could he have hidden it somewhere? Or, could it just not have ever existed at all? These were questions that seemed unanswerable at the time.

With the contents of his luggage thoroughly searched, the family gave permission for his possessions to be sold off. Amazingly, the most valuable item that Goldberg owned was his wooden leg. They were very costly and hard to come by at the time.

As it turns out, a Polish consular official named Wieder, his first name lost to history, had lost one of his legs during World War I. He already had a wooden leg but liked Goldberg’s better. He figured he had nothing to lose if he tried it on. If it fit, he would offer to buy it.

Somehow, in the process of trying on the wooden leg, Wieder hit upon some sort of spring mechanism. When it was unlatched, a small hidden compartment was revealed that contained a rolled-up wad of cash. When Wieder counted it, he found 88 $1,000 banknotes in there. 88,0000 buckaroos in total. That would be about the same as having about a million dollars today.

One would think that all of the money would have gone directly to Rose and her children, but it wasn’t that easy.

First, Rose had to prove that Noach Goldberg and Frank Laiken were, in fact, one and the same person. It was not easy and took more than a year to do, but eventually the skeptical Polish consulate was also convinced of the same thing.

Second, Austrian law at the time forbid the sending of money outside the country. Rose had to go to Austria herself to ask the courts for her rightful inheritance. Nine years after his death, the court ruled in Rose’s favor, although she was only awarded a total of $45,000. That would be like getting $650,000 today, so do not feel too sorry for her. Being Frank Laiken’s widow, she was awarded one-quarter of this amount, with the remainder going to their two daughters, Adele and Marilyn, who were 18 and 12 respectively at the time.

Surprisingly, while researching this story, I found out that Frank Laiken wasn’t alone in hiding money in his wooden leg.

A February 2, 1911 article in the Washington Post discusses the life of Herbert Manley, who left his job as a New York City streetcar conductor ten years prior. He headed off to Alaska and lost his left leg in the spring of 1906. Two years later he struck a rich vein of gold, filed his claim, and sold off the undeveloped mine for $200,000. He carried $150,000 in his false leg at all times. He claimed to sleep with his left leg and the fortune it contained under his pillow every night.

On October 17, 1922, a man named Jim Cote walked into a White Plains, NY police station begging for a place to sleep. He said that he was broke and they allowed him to stay. The next day a policeman noticed that he kept messing with his wooden leg. A search revealed that he had $90.06 concealed.

On February 6, 1938, the body of 63-year-old Phillip Iellins was found hanging in his room at an Indiana, Pennsylvania house. Iellins had been living on relief payments for years and his death was ruled a suicide. $4,204.85 was found hidden in the hollow of his wooden leg.

Then there is the missing leg of 65-year-old Donald McDonald. On January 22, 1953, a public trustee in Sydney, Australia ordered that his body be exhumed. While McDonald was thought to be penniless, relatives said that he was not. They believed that he was buried with this fortune hidden in his wooden leg. The undertaker could not remember if McDonald was buried with it or not. His gut feeling is that he was not, since the morgue would have probably discarded it, but they needed to check to be sure. It was not there. 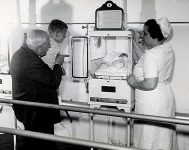 A premature baby born prior to the 1940s had little chance of survival unless the baby was lucky enough to be part of a popular sideshow exhibit at Coney Island.

Can you imagine Thanksgiving without cranberries? That actually happened in 1959 when cooks across America tossed out all of their cranberry products.