On July 19, 1962, it was reported in Marstons Mills, Massachusetts that 20-year-old Lois Ann Frotten had survived a nearly fatal skydiving accident.

Her jump started out fairly routinely.  At about 2,000 feet (610 meters), she leaped out of the airplane for what was to be her first jump.

She was quoted as saying, “For a few seconds I had a wonderful, free feeling while falling.”   Ms. Frotten added, “I thought I had gotten out of the plane all right.  I thought I had made a good jump.  But then I realized my foot was caught in the foot of the parachute.”

She did have a safety chute but did not have the strength to pull the cord to open it.  As a result, she tumbled end-over-end.  Witnesses on the ground said that the entangled sleeve of the parachute disengaged somewhere between 100 and 150 feet (30 and 45 meters) above the Earth’s surface, allowing the chute to partially open and slow her down a bit.

She struck the surface of a lake feet first.  Ms. Frotten was rushed to the hospital in Hyannis but found to only suffer from two minor fractures of small bones in her spines, a cut to her nose, and some bruises. 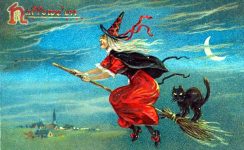 Back in 1921, New York City resident Etta Caulfield decided to dress up as a man for Halloween. Soon she was arrested for doing so.