Between the years of 1981 and 1988, someone was breaking into pay telephones across the United States, costing the Bell System an estimated half-million dollars.  It was believed by investigators to have been the work of just one man since the phone locks were considered to be unpickable.  And, to show that he had a sense of humor, the crook always checked into cheap motels using the alias “James Bell.”

The FBI did have a general description of the man.  He had eyeglasses, wore western-style clothing, cowboy boots, a baseball cap, and had a long ponytail. By not staying in one location very long – he stole from phones in at least 24 different states – he was able to stay one step ahead of the police. Even a segment on the television show America’s Most Wanted did little to help find the crook.

Finally, in late August of 1988, police identified the suspect as 49-year-old James Clark of Buena Park, California, and issued a warrant for his arrest.  He wasn’t too hard to find – he just happened to be at home and offered no resistance at the time of his apprehension. A Pacific Bell spokesman said, “We are pleased that we have a suspect in custody.  He’s been a pain in our phones for quite a while.”

It turns out that Clark was a former automotive transmission machinist and he had fashioned a lock pick out of piano wire. Through distinct scratches left on each payphone, he was definitively linked to the theft of the coins from twenty-three telephones in Columbus, Ohio in May and June of 1985.

Clark pleaded guilty to one count of theft and two counts of coin machine tampering.  His penalty was three consecutive one-year terms in the slammer, plus orders to reimburse Ohio Bell for $802.50.  Seems kind of lenient for stealing half a million dollars… 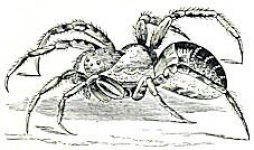 A Montgomery, AL officer had to deal with an erratic banana truck driver who had a tarantula in his pants!