This episode of the Useless Information Retrocast includes the following:

Question of the Day: When was the first Christmas film made?

The three commercials featured in this Retrocast are from the Christmas episode of the Al Pearce Show, which was broadcast on December 20, 1939.

How to Fill a Giant Christmas Stocking (1965)

Santa Claus Has Trouble Getting Down This Chimney (1937)

Ontario Boy Given Snake by Museum (1949)

In 1930, Michael Filosa slashed his half-brother Salvatore De Hall to death while he was sleep-walking. Could he have really done such a thing? 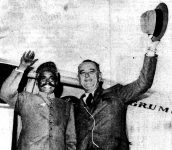 On May 20, 1961, then US Vice President Lyndon Johnson had a casual conversation with a camel driver named Bashir Ahmad. The next thing you know, Bashir was on his way to the United States in the feel-good news story of 1961.

Please stop including your wife! The semi back and forth ruins your shows!

I am sorry to hear that you feel that way. The good news is that the next show, which goes live early Thursday morning is just me. I plan on recording most of the longer stories by myself, although I do plan on having a historian on shortly to discuss one of those stories. Steve 🙂