Was the Bionic Beauty Salon sexist? After all, the bionic Six Million Dollar Man got a Bionic Transport and Repair Station.

Here’s the text of an article discussing this issue which appeared on page 34 of the Star Tribune on October 7, 1976:

The Bionic Woman, as any self-respecting television viewer knows, isn’t exactly the story of the work-a-day life of your average. middle-class female.

Bionic Woman Jaime Sommers, thanks to the marvels of science, does superhuman feats She runs 60 miles an hour, she can hear conversations through concrete block walls, she can leap giant obstacles with a single bound.

She is pretty — who in television isn’t — but one gets the idea she doesn’t have much time for primping between foiling espionage plots and escaping from enemies trying to do her in.

So, a doll created in her likeness should be no-nonsense, ready for action, right?

The Bionic Beauty Salon, the Kenner people are quick to point out, is more than just a place to make Jaime pretty.
It has a sort of computerized repair station to check out Jaime’s bionics — along with its bionic sun lamp, comb, brush and hair dryer.

And the doll also has its own “designer” wardrobe (whatever “designer” — that pet word of TV ad people — means) and a pink and green Bionic Woman Dome House for entertaining her bionic friend, Steve Austin.

Why does such an uncommon doll have to have such common accessories?

“To give it more play interest,” explained John Beck, a public relations man for Kenner Products, a division of General Mills located in Cincinnati.

But his wardrobe consists of only one red jumpsuit and he has no grooming aids — not even a bionic electric razor.

Beck said the Bionic Beauty Salon is comparable to Steve Austin’s repair station, even though its title implies that its purpose is to make Jaime beautiful.

The toy industry has trouble naming products, Beck said, because many names are already in use. Kenner considered several other names for the product, but settled on the Bionic Beauty Salon because other choices were taken, he said.

The designs (or the Bionic Woman products, he said, were done by “young gals who are very with it,” and none of them expressed misgivings about the accessories.

Before the products were marketed they were “play-tested” with kids, said Beck.

He said Kenner had designed the Bionic Woman assuming the children would like playing with a doll that is a “woman of action.”

But, he said, “All the kids thought about was getting her a date with Steve Austin.

“Kids that age don’t care about whether she’s a woman of action.” he said. 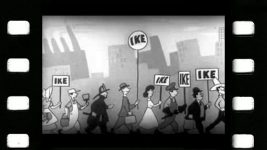 1952 animated "I Like Ike" television advertisement for US President Dwight D. Eisenhower. 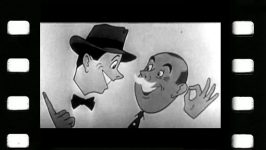