And now for today’s story on the Sikorsky Sweater Girls, which first appeared in the press on February 11, 1943. This was the height of World War II, and since so many American men were overseas fighting at the time, women were recruited to work in the factories to help with the war effort.

On this date, 53 women were fired from the Vought-Sikorsky Aircraft division of United Aircraft Corporation in Bridgeport, Connecticut. The reason? Very simple. The women were wearing sweaters, which was against corporate policy.

Now, I should point out that wearing a sweater was not against the rules for all women employed by the company – only for those that worked on the production line. If a woman worked in a clerical position, sweaters were completely acceptable.

Keep in mind that this was during the height of the Hollywood Sweater Girl phenomenon. Women on the big screen wore tight-fitting sweaters with bullet bras to accentuate their curves. I’ll let you use your imagination to figure out which curves of the female form I’m referring to. And, as with many other trends created by celebrities, the sweater fad spread to the general population.

And there lies the problem. Women wearing these snug sweaters were considered to be a safety hazard on the manufacturing line. The women were in no danger themselves, but the men were a different story. It was believed that the sweater girls were a distraction to the men, who would take their eyes off of what they were working on and refocus on the wrong thing. Make that a pair of wrong things. Then… oops… loss of a finger, hand, or possibly death by the heavy machinery they were using.

A 1942 US government report stated “Lay down the law… no sweaters allowed. If a pulchritudinous girl wears one she can usually demoralize a plant in ten minutes. Not only will the men have a hard time making their eyes behave but the other women will rise up in indignation.”

And that is exactly what the Vought-Sikorsky plant did. Female workers in the plant were required to wear what was referred to as a “Jeep Suit”, which was basically a two-piece, blue-denim outfit. Think Rosie the Riveter. The women, at least those working in this aircraft plant, hated them. The Jeep suits were just too bulky, hard to work in, and expensive. Worst of all, at least according to the press, they were just downright unattractive.

As a result, many of the women chose to wear sweaters instead. Not only were they more attractive and lower in cost than the Jeep suits, but the women could also easily roll up the sleeves while working. After numerous complaints, Vought-Sikorsky management relaxed the dress code a bit – allowing female employees to wear their own blouses and slacks – but they stuck to their outright ban of sweaters.

And the women continued to wear them until the 53 women were sent home on that February day. In a show of support, an additional 22 women also walked off the job. When all of their male co-workers threatened to walk off the job, the company allowed the women to return to work and sought out some sort of agreement between management and labor.

At the urging of their union officials, the women returned to work the next day without their sweaters on, awaiting a decision on whether they could or couldn’t.

While an agreement was being ironed out between the labor union and the company, others around the country offered their opinions.

An official at Grumman Aircraft on Long Island was quoted as saying “We encourage them because of the safety angle.”

Yet, competing Curtiss-Wright officials felt differently. An executive at the company stated, “Sweaters hold up the assembly line.”

The federal government’s Office of War Information issued a report concluding that the sweaters should not be worn in war manufacturing. “It isn’t just a rumor that a tightly sweatered working companion takes a man’s eyes off his machine.”

Hollywood actress and sweater wearer Ann Sheridan chimed in with her opinion. “Sweaters that are in good taste can be worn at war work as well as on the street or in the home. If sweaters worn by women are not in good taste, they don’t belong in the factory any more than they belong elsewhere.”

Local talks between the union and the company went nowhere. G.B. Anderson, personnel manager for the company at the time, stood by the company’s policy. He said that the policy was based on two considerations. Those were “safety and the fact that girls come here to work and not to be attractive to the men.”

The union’s next step was to take their case to the State Board of Mediation and Arbitration. When that didn’t work, they went to Washington, DC, turning the matter over to the United States Conciliation Service. Elizabeth Christman was appointed as the mediator between the two sides. While being a woman may have been viewed as providing an edge to the Sweater girls, the press was quick to point out that Miss Christman did not wear sweaters.

It took two months, but an agreement was finally hashed out. It allowed for any woman that didn’t work with moving machinery or on jobs that required special types of safety equipment to wear sweaters. That was about 75% of the women working in the plant. Those that worked in the more hazardous jobs would be required to wear a two-piece outfit. Unlike the awful Jeep Suits, these new outfits came in two different styles and were a cotton twill. Best of all, the company had to buy them for the women.

Six men died in a Chicago woman's home over a three-year period, all of whom were married to 47-year-old Margaret Summers. She had taken out 19 life insurance policies, all naming her as the sole beneficiary. 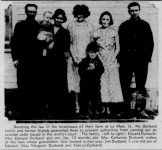 The Great Depression was an awful time for farmers in Iowa, culminating with the near-hanging of Judge Bradley in Le Mars over a farm owned by T.M. Zink.