Some of the contests included the Weight Carry, the Recovery Dive contest, and a Compass Course event.

But, the highlight of this event was the last contest of the day. It was a diving contest that involved homemade midget submarines. These various crafts had been built from old aircraft parts, boilers, and steam fittings. Contestants in this contest came from great distances to compete. Basically, the divers had to use all of their diving skills to capture one of these elusive submarines.

According to the article, the first Submarine Rodeo was held in 1959 at Pleasant Lake. The contest continued through the mid-1960s, although it is unclear when they held it for the last time. It was reported that one of the big problems with these homemade submarines was that Lloyd’s of London refused to insure any of them. 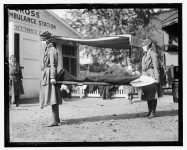 Could beet salad be the cure for the influenza that spread worldwide back in 1918. One Austrian doctor believed so.