A New York Times article from August 4, 1920 describes how Great Britain was importing a large quantity of men’s suits from Germany because they were much lower in cost to purchase. All of these suits were fashioned in the latest English styles of the day.

An entire suit could be purchased for between $0.46 and $1.95 each ($6-$25 today), which, according to the article, meant that a man could buy a new German suit every week for an entire year and the total cost would be less than 1 British-made woolen suit.

There was one big catch, however: The low-cost suits were made of paper.

The Man Who Gave Away His Birthday – Podcast #108

When Robert Louis Stevenson learned that Annie Ide disliked her Christmas birthday, he gave her his birthday. The story includes an interview with Heather Finn, the woman who inherited his birthday. 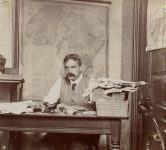 A company in London decided to do away with desk trays labeled Incoming and Outgoing. Instead, they came up with trays with more realistic labels.