At the end of the season, the show’s sponsors – General Foods and Kimberly-Clark – opted not to renew their contracts with the CBS network. Without a sponsor the show would have almost certainly been canceled.

The Last Man on Earth

Did you ever wonder what would happen if you ended up being the last person alive on Earth? Back in 1960, the San Francisco Chronicle decided to send their hunting and fishing columnist Bud Boyd up into the Marble Mountains of California for six weeks to find out if one could really survive. Let’s just say that everything did not go as planned…

END_OF_DOCUMENT_TOKEN_TO_BE_REPLACED

On August 4, 1960 a mule in Shallotte, North Carolina managed to wreck three cars.

END_OF_DOCUMENT_TOKEN_TO_BE_REPLACED

Six students from the Santa Rosa Junior College in California found themselves in a bit of hot water on April 24th of 1960. The students, one female and five male, dressed up in roaring ‘20’s style clothes for the school’s annual “Character Day.”  The 19-year-old woman wore a classic flapper outfit, while the five guys, ranging in age from 18 to 21, went for the classic mobster look of long coats, hats, and sunglasses.

END_OF_DOCUMENT_TOKEN_TO_BE_REPLACED

The Sky is Falling

Alvin Rodecker and his wife chose to celebrate his 60th birthday in style.  It was to be an incredible, memorable trip to New York City.  If only he had looked up after upon leaving a ritzy restaurant…

END_OF_DOCUMENT_TOKEN_TO_BE_REPLACED

An odd true story about a San Diego robber dubbed “Jack the Stripper” by the press in the early 1960’s. Listen to this episode to learn about his unusual motus operandi.

END_OF_DOCUMENT_TOKEN_TO_BE_REPLACED 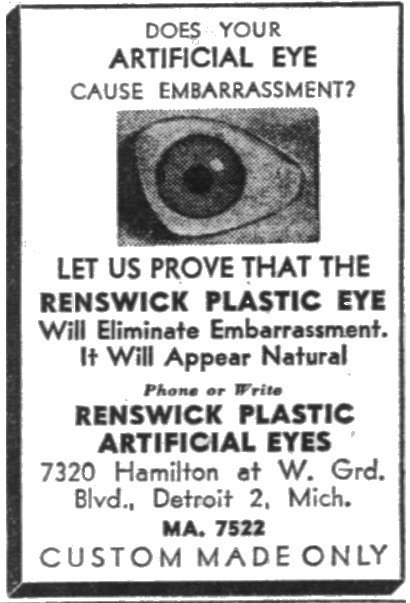 This advertisement for Renswick Plastic Artificial Eyes advertisement appeared in the March 12, 1948 issue of the Detroit Free Press. (Click on image to enlarge.)