Fails to Win Back Wife After Two Suicide Attempts

Tt was reported that Stanley G. Peralta, a 19-year-old draftsman from Pasadena, California was so distraught over his 17-year-old wife Luella leaving him that he attempted suicide twice at 2:30 AM on January 31, 1956. The couple had married on February 10, 1954, when Stanley was 17 and Luella was 16. At the time of this incident, the couple had a 20-month-old son named Roland.

As Peralta was driving eastbound on Colorado Street (today Colorado Boulevard), he opened the car door and rolled into the path of oncoming traffic, hoping to be struck and killed. When the other car swerved and missed him, Peralta stood up and ran after his car that was still coasting down the street. He then threw himself under the vehicle’s rear wheel.

The car stopped when it crashed into a storefront at 1706 E. Colorado Street. (Today a Chick-fil-A sits at that location.) When officers arrived on the scene, they found a despondent Peralta sitting in the backseat of his car. He was taken to Huntington Memorial Hospital where he was treated for cuts and bruises and then released.

His wife Luella, who met reporters at her mother’s home at 126 N. Meredith Ave., insisted that her husband’s dual attempted suicide would have no bearing on her decision to leave her him. 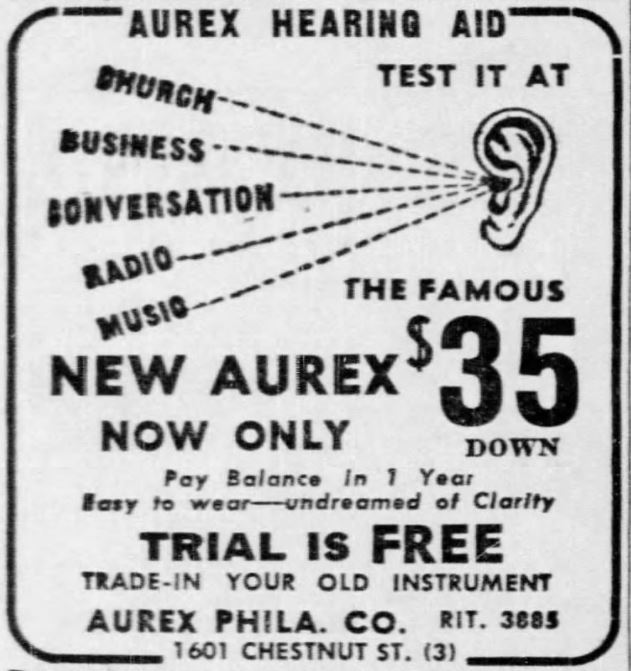 Ad for Aurex Hearing Aid that appeared in the April 16, 1944 issue of the Philadelphia Inquirer. (Click on image to enlarge.)