On April 6, 1976, the Ottawa Journal published an article penned by Ian Haysom on the rock group Heart, who have sold more than 35 million records to date, that was titled “Call them Vancouver superflops.” He just tore into just how bad he thought that Heart was.

The story begins, “Take Heart. As far away as possible. And, for Ottawa’s and Canada’s sake, don’t let them encroach upon our sensibilities again. Plug their ventricles, twist their arteries, allow them to expire quickly.”

He described their performance at the National Art Centre the previous evening as “It was painful, ugly, excruciating, and artistically disgusting.” He continued, “Suffice to say that almost everything they try they do badly. They can’t sing, they can’t play their instruments and they can’t entertain.”

The only person in the band that he had anything positive to say about was lead singer Ann Wilson, who many today consider to be one of the best female rock vocalists ever.  “Only Ann Wilson, a female parody of Mick Jagger with as much talent over-all as he possesses in his lower lip, approaches that thing called ability. She plays the flute passably well and struts sexily about the stage, which at least takes attention away from the music, such as it is.”

He concludes his brutal attack on the band with, “So have a heart, Heart, and have a heart attack for music’s sake.”

Elton John was the best-selling musical act of the 70’s, but few people realize that the best-selling American band was the brother-sister act of the Carpenters. James D. Dilts offered up a review of a Carpenters concert in the August 3, 1972 issue of the Baltimore Sun and immediately observed how different it was from any other concert he had attended.  “I knew something was wrong as soon as I got to the gate. No suburban attack squads in tattered clothes roaming the fence, feinting at the entrance only to go over or under further down. No rocks. No epithets.”

Even more unusual was how easy it was for him to get backstage. Roadies and managers do everything possible to keep fans from gaining access. Yet, it was very different this time. The group’s manager walked out to greet him and let Dilts in without any debate. Once the Carpenters hit the stage, it was more of the same. Some of the audience members were dressed in nice clothing, stayed in there seats, and there was no sign of drugs or alcohol.

Personally, the Carpenters have always been one of my guilty pleasures.  I know that their syrupy music makes some people want to puke, but in my mind no one can sing a depressing song better than Karen Carpenter.  Dilts offered up his opinion, “The Carpenters music bears the same relationship to American popular music, roughly, as Disneyland bears to American society. All the impurities, the vitality, the diversity, have been strained out and the bland remainder repackaged into a sort of Mickey Mouse version of the real thing.”

He concludes the article by stating, “I went straight home and put on the Rolling Stones to clear my mind.” 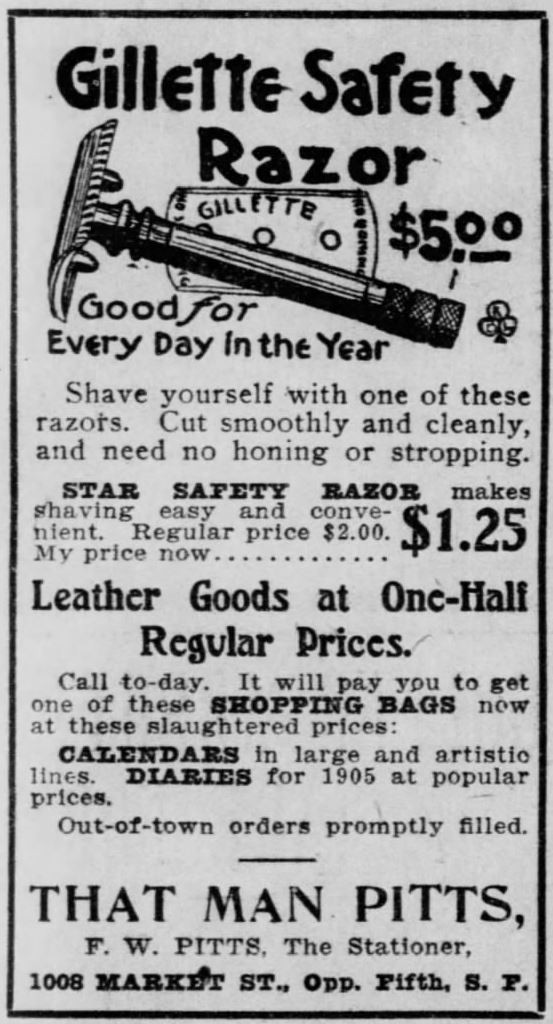 Gillette Safety Razor Ad which appeared on page 9 of the January 3, 1905 issue of the San Francisco Call. (Click on image to enlarge.)