And now for today’s story on the day that the United States dropped four hydrogen bombs on Spain. While researching this story I was quite surprised to learn that an estimated fifty nuclear warheads were lost during the Cold War all around the world.

There is documentation that the US lost eleven nuclear bombs in various accents since 1945 and these were never recovered. Yes, they are still sitting there. Some are truly lost. Others have been located, but it has been determined that it’s safer to let them lie where they are than to attempt to recover.

For today’s story, I decided to tell you the story of bombs that were found on the day that we accidentally dropped four H-bombs on Spain.

The plane involved in this accident was a B-52G United States Air Force bomber that had originally taken off from the Seymour Johnson Air Force Base in North Carolina and flew towards the European borders with the Soviet Union.

You don’t need to be a rocket scientist to realize if you’re going to fly from North Carolina in North America over to Europe and then all the way to the edge of the Soviet Union, and then turn around and come back without stopping, you’re going to need a lot of fuel. And, because it is such an incredibly long distance, two midair refuelings were scheduled over Spain.

An enormous explosion occurred and all four men in the tanker plane and three of the seven crew members aboard the B-52 were killed. Of the four surviving men, one was burned by the explosion and three parachuted to safety several miles out to sea.

Serious accidents and death are never ever taken lightly by the military, but they had an even bigger problem on their hands this time. That’s because this B-52 carried four 1.5 megaton hydrogen bombs. Each about 100 times more powerful than the bomb that was dropped on Hiroshima during World War II.

The first three bombs were located within a 24-hour period around the small fishing village of Palomares, which is on the southeastern coast of Spain. The fourth bomb proved to be far more elusive.

The first bomb was found fully intact, and there’s much to add to that, so it’s not worth discussing. Bombs two and three were worse off because hydrogen bombs contain non-nuclear explosives, which are needed to trigger the nuclear blast. Basically, the conventional explosive goes off, triggers a fission reaction, which, in turn, creates the very high temperatures needed for a fusion reaction. When these bombs hit the ground, the conventional explosives went off and spewed nuclear material plutonium over 558 acres of land.

The United States government ended up spending $80 million to clean up this mess. They had to remove some 1500 tons of contaminated soil and the tomato plants that were growing in that soil. It was all placed in steel drums and hauled off to a nuclear waste dump in South Carolina.

You just never know it’s in your backyard…

And now for the fourth and final bomb. An intensive search was carried out, but they could only locate its parachute. Since the bomb was nowhere to be found on land, the military reached the conclusion that it must have been carried out to sea.

It was learned that a local fisherman named Francisco Simo Orts claimed to have witnessed that the bomb landing in the Mediterranean. That information helped the military narrow down its point of impact somewhat, but it was still a vast sea.

150 Navy divers searched to a depth of about 350 feet, but there was no sign of the bomb. Ultimately, they brought in the Alvin Deep-Sea submersible to search for it, and they found the bomb on March 17th, two months after the crash.  They found the bomb sitting on the edge of an underwater canyon at a depth of 2,550 feet.

But finding it and actually retrieving it are two totally different stories. In their attempt to bring it up from that great depth, they lost it and it fell even farther down into the canyon. The Alvin submersible located again on April 2nd, but now it wasn’t located at 2550 feet of depth. Now it was at 29,800 feet in depth. That’s more than ten times the distance that it was originally found that.

An unmanned torpedo recovery vehicle that was called CURV was able to bring it up to a depth of 100 feet, at which point the Navy divers attached cables to the bomb and finally brought it to the search.

Amazingly, the bomb was still fully intact and there was no leakage of its radioactive cargo, but that’s not the end of the story.

Let’s zoom forward to today, and it turns out that scientists have detected higher levels of radioactivity in the Western Mediterranean plankton and other wildlife that’s in the region.

Some people have suggested that there was a fifth bomb, but there really is no evidence to support that. All the B-52s at that time carried four bombs, so assuming there’s no fifth bomb, where is this radioactive material coming from? The answer is simple. It’s believed that the contaminated soil from the impact site has been washing toward the Mediterranean Sea. Every time it rains, the water runs off and carries radioactive material down to the Mediterranean.

Luckily, studies have shown that plutonium does not accumulate in greater concentrations in the fish that eat the plankton, unlike other chemicals. So, there have been no known health problems reported to this date.

As a side note, Francisco Simo Orts, the local fisherman who witnessed the bomb enter the water, claimed salvage rights for the hydrogen bomb that was pulled up. Under admiralty law, the person that identifies the location of a salvaged vessel receives an award. Usually, it’s one or two percent of its value. On a $2 billion hydrogen bomb, we’re not talking about chump change here.

It was settled out of court for an undisclosed sum, so we don’t know how much he got.  Maybe was a dollar maybe a million. Maybe was ten million. We really don’t know. 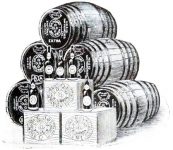 On July 12, 1949, men doing excavation work for a building project in Cincinnati, OH unintentionally broke into some long-forgotten wine cellars.