I thought for today’s podcast I would tell you about the kidnapping of Caleb Milne IV.  It is one that I stumbled across while reading an old newspaper and it just became more fascinating as I researched it more and more.

First, we need a little background on Caleb the IV and that starts with his great, great grandfather David Milne who started a textile manufacturing business in Philadelphia in 1830.  A number of sons, grandsons, etc. were involved in the business, but let’s just stick to the Caleb’s.

The company was liquidated in 1924 after ninety-four years of operation by four generations of the Milne family.

But wealth can also bring its share of problems.  On December 14, 1935, the family received the shocking news that 23-year-old Caleb IV had been kidnapped.  The aspiring actor and short story writer had been lured out of his NYC studio apartment by a disturbing phone call that told him that his grandfather – Caleb Jr – had become critically ill and he needed to come quickly.  When he was last seen, he had asked his landlady for directions to a small park called Gracie Square, which is located at the end of East 86th Street where it intersects with the East River. It was there that he was to meet a “Doctor Green” and then drive off to his grandfather’s bedside in Philadelphia.

His brother Frederic, with whom he shared the apartment, received a ransom note that had been pasted together from newspaper clippings.  It said “Your brother isn’t in Philadelphia.  We’ve got him out in the country, but he will be returned living if you will follow the letters we will send you.  Available cash must come from New York.  Keep in touch with your grandfather by telephone.  Letters will be signed Zwitler.”  The note was postmarked Poughkeepsie, NY.

A second, and then a third, ransom note was then delivered.  Police searched hundreds of boarded-up summer cabins in the area that surrounded his mother’s Woodstock, NY home.  FBI agents were repeatedly entering and leaving the grandfather’s mansion.  A $20,000 ransom was demanded, and the family awaited word on where to pay it.

His parents were separated and did not have that kind of cash, but by specifying the grandfather specifically in the ransom notes, it was clear that the kidnappers knew that he was the one with the big bucks and they expected him to come up with the cash.

Then a small package arrived in the mail containing his wristwatch and an Albany newspaper that he had stained with blood.  This was clear proof that he had been kidnapped.

Five days after his kidnapping (Dec. 19th), four motorists spotted something in a ditch.  There they found Caleb IV bound and gagged with tape near Doylestown, PA.  His eyes and lips were taped, his wrists bound to his knees.  Needle marks were found on his arms and in a drugged delirium blurted out “don’t stick that needle into me again”.  He claimed that his kidnappers threw him out of a moving car.

He was quickly taken to the hospital where he was treated for exhaustion and exposure.  Doctors feared that pneumonia may set in, but the young Caleb quickly returned back to good health.  Caleb described his ordeal in detail to the investigators assigned to the kidnapping.  He said that he was kidnapped by a gang of four men and held at a ramshackle house.  He was fed only once in four days and they repeatedly injected him with morphine.  Investigators found the clothes that he was wearing the day he was kidnapped behind a school about a mile from where he was ultimately found.  They followed a number of leads, but no one was ever arrested.

And there was good reason for that.  In a shocking turn of events, the one and only J Edgar Hoover announced to the world on December 28th that the kidnapping was all a hoax.  The youngest Caleb signed a confession at 4 AM earlier that morning that he had faked his own kidnapping. He claimed that he had no intention of obtaining the $20,000 ransom from his grandfather – he did it to bring attention to his acting budding acting career.

It also was revealed to the world that he was living an extremely poor existence in New York City at the time.  He received a $10 per month allowance from his grandfather and lived with his brother Frederic in a furnished room.  The FBI believed that these horrendous living conditions pushed him over the edge to the point where he was determined to get more money from his grandfather.

Here is part of what he said in his confession statement:

“I admit that my alleged kidnapping was perpetrated by myself.  Because of my desperate financial situation and inability to find a job, I felt, since I was seeking work on the stage, that if I could get some publicity I would get a job.”

So how did he do it?

Everything was prepared and purchased in advance – the three ransom letters, the package with his watch, and the tape needed to tie himself up with.

Of course, you can’t fake your own kidnapping and get away with it.  He was arraigned on federal extortion charges (basically, he violated US Postal Service rules) and held with bail set at $7500.  His grandfather refused to pay it, but his family pulled the funds together to get him out on January 9th.

He never returned to jail or faced a trial.  All charges were dropped on February 26th when a federal grand jury failed to return an indictment.  He was a free man.

But he faced a bigger punishment.  When his grandfather died in 1941, the youngest Caleb was not left a single penny of the $431,000 estate, which would be the equivalent of over $6.3 million dollars today, adjusted for inflation.

So, was there ever a Caleb the 5th?  Did his acting career pan out?  Sadly, no.  Caleb the IV died on May 11, 1943, in Tunisia, which is in the northern part of Africa.  He was a US Army stretcher bearer and was killed by a mortar round just two days before the end of the Tunisian Campaign of World War II.

Letters that the youngest Caleb had sent home were published in 1945 titled “I Dream of the Day.  Letters from Caleb Milne, Africa 1942-43.”  If you are curious, just do a search and you will find that the entire book is available online for free. 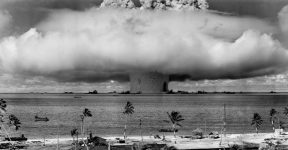 The residents of Palomares in Spain are still dealing with the effects of the four hydrogen bombs accidentally dropped on this small fishing village back in 1966.

Back in 1920, Newark, NJ was host to one of the most bizarre funerals ever. An estimated 10,000 people lined the streets to witness the funeral procession of Jimmie the singing canary.