22-year-old Kentucky native Jim Owen really went the distance for love. He met 21-year-old Ximena Villareal while she was an exchange student at the University of Kentucky. They dated for a few months before she returned home to Santiago, Chile. The two continued corresponding by mail and she asked him to come visit her.

Most people would hop on a plane. But not Jim Owen. He came up with a crazy idea to ride the 8000 mile (12,800 km) distance on a motorscooter. Jim convince a US distributor that will be a great sales promotion if they donated the bike to his cause. He also secured a $500 (approximately $4000 today) letter of credit and he was on his way.

“I’m not the type of person to jump on a motorscooter and ride thousands of miles to see a girl. We are not engaged or anything like that, but I like her a lot.” He continued, “I’m not adventurous by nature, and I’m certainly not athletic.”

He embarked in early May 1962 and his goal was to get to Santiago on December 31st so they could ring in the New Year together. The press never did a follow-up on the story, but it’s probably safe to assume that he made it there and the two were reunited. 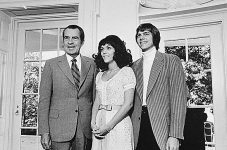 James D. Dilts offered up a review of a Carpenters concert in the August 3, 1972 issue of the Baltimore Sun comparing their music to that of Disney.

Too Pretty to Teach

Back in 1906, Genevieve McGraw was fired from her teaching position for being too popular and pretty.