Suzy Dewey was a five-year-old girl from Grand Rapids, Michigan who was diagnosed with leukemia.  While highly treatable today, such was not the case back in 1965.   Sadly, Suzy Dewey’s case was diagnosed by doctors as terminal.

When asked what she wanted for Christmas, Suzy replied that she wanted a big dollhouse.  While not an unusual request for a little kid, Suzy was one of eight children and her parents, Mr. & Mrs. George Dewey, were unable to make her dream come true.

Enter into the picture her older sister Debbie’s boyfriend, 18-year-old Roger Zoet and another friend named Leonard Pechauer, also 18 years of age.  The two young men had played with Suzy and were determined to make sure that she got her playhouse for Christmas.

They recalled an abandoned little green house – just 8’ x 8’ (or about 2-1/2 x 2-1/2 meters) in size – that they had spotted while on a hunting trip near Newaygo, a rural town in central Michigan.  You know exactly what they thought – what a great playhouse that would make for little Suzy.  So, the two boys drove to the site, loaded the little building onto a trailer, and hauled it back to Grand Rapids.

Abandoned or not, one cannot simply drive off with a building.  Someone was sure to notice.  That someone was the owner of that little house, Clarence Gifford.  The boys soon learned that the house was used long ago by children waiting for their school bus to arrive.  While no longer used, the little building had become something of a landmark to the people of Newaygo.

Once the news had spread that the little green house was missing, the two boys knew that they were in big trouble.  They were quickly arrested, thrown in the slammer, and each was sentenced to thirty-five years in prison.

Okay.  Not really.  They were never arrested.  The two boys quickly notified the police that they had the building and their families arranged for its return.  Each boy paid fines of $37.50 to the Newaygo justice court and was free to go.  Clearly, a case of the boys thinking with their hearts and not their brains.

Soon after this story made the news, Chicago Cub Scout Pack 3189 took it upon themselves to fulfill Suzy’s wish.  This time it was to be done legally.  The boys built a replica of a 10-story office building, complete with a revolving front door.  The building, which was delivered to Suzy by two Grand Rapids policemen, stood nearly as tall as Suzy did.  She was thrilled with her new dollhouse.

One year later, Suzy was once again back in the news.  By this time, her health had made a turn for the worse.  The aggressive treatments that doctors had given her had caused her to lose nearly all of her fluffy hair.  She was nearly bald and refused to leave her house unless she was wearing a hood over her head.

All Suzy wanted for Christmas this year was to get her brown hair back.  The obvious solution was to get Suzy a wig, but the family couldn’t afford it on dad’s meager car salesman salary.

Within twenty-four hours of the story being spread by the various news agencies, the public response was overwhelming.  The family was barraged with phone calls and offers of wigs poured in from across the nation.  Frank Sinatra offered to buy her a wig or “anything else she wants for Christmas.”  A group of students at Hope College collected $76.56 (about $550 in today’s money) to help her buy that wig.  A local department store said that Suzy could come in and get a wig for free.  A wiggery in Detroit offered her the same.  Another wig manufacturer in Tulsa, Oklahoma offered her “one of the finest wigs in the United States.”  The International Furniture Upholsterers Union kicked in $25 to start a fund to purchase gifts for little Suzy. Within just a couple of days, Suzy was at Wurzburg’s Department Store being fitted with her first wig.

Best of all, the family had been contacted by an agent for comedian Jerry Lewis stating that he had offered to fly the entire family out to Hollywood to spend Christmas with him and his family.  There was the promise of a trip to Disneyland.

The family was nearly all packed and ready to go when the news broke that the trip to Hollywood was all a big hoax.  How anyone could be so cruel to a dying girl is beyond belief.  Truly downright cruel.

Suzy was never told that she was the victim of a hoax.  There was no need to because two days after Christmas, she was off to California.  This time it was for real.  Accompanied by mom, dad, and her 4-year-old sister Katie, the Dewey clan landed at Los Angeles airport on December 26th.

An anonymous benefactor from Los Angeles had heard of the hoax and paid the entire airfare.  Not only did they get to go to Disneyland, they were also invited as guests to Marineland-of-the-Pacific, Universal Studios, Knotts Berry Farm, and other local amusement parks.

By this time, Suzy was quite frail and required a wheelchair, but that did not diminish her excitement.  She went on several of Disney’s rides, including the Mad Hatter’s Teacups where she urged the spinning teacup to go “Faster. Faster.”  She watched the Disneyland Christmas parade, an Old West show, and the Golden Horseshoe Revue.

I guess one could say that in the end, Suzy Dewey got everything she wished for, even if that involved a stolen playhouse and a nasty hoax.  But there was one thing that money and all the publicity in the world couldn’t buy.  Less than two months after her trip to Disneyland, Suzy Dewey took her final breath at 4:30 AM on February 22nd of 1967.  Her mother, father, and uncle were at her side.

Her mom was quoted as saying “In the two weeks that she has been dying at the University Hospital, she never cried once.”  She added, “But just before she died at 4:30, she said ‘Mommy, I want to die.”  Suzy then succumbed to the disease that she had so bravely fought for 18 months.  She was just 6 years old. 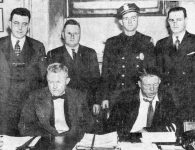 On Christmas Eve of 1937, a man in Centerville, Indiana kidnapped a young boy and his babysitter. Minutes later, the boy's mother and the local grocer were taken prisoner by a second thug. A shootout between the bandit and the boy's father then followed. 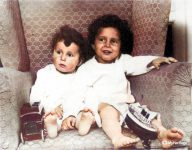 After the Titanic sank, two brothers were orphaned after their dad perished. The search for a family member became an front page news worldwide. Just who were they?