This story dates to February 9, 1896, when the President of the Board of Commissioners who ran the New York City Police Department declared war on the banana skin. He just happened to be future United States President Theodore Roosevelt, who served in that role from 1895 to 1897.

He summoned the Captains, Sergeants, and Roundsmen from a number of police precincts and made it clear that they had to do something regarding the prevalence of banana peels on the streets of the city’s east side. In particular, he pointed out that people tend to slip on banana peels and then fall with terrific force onto the street. But his complaint wasn’t limited to banana peels. He requested that the policeman work to keep the streets clear of apple and potato skins and similar produce byproducts.

This followed a complaint from Colonel George E. Waring Jr., who was hired by the city in 1895 to deal with its intolerable sanitary conditions. The streets were covered in horse manure and urine, the carcasses of horses were prevalent, and garbage was piled knee-deep on the streets. Through both regulation and an army of street cleaners, Waring was able to get the streets cleaned within a year and he wanted to keep it that way.

There was already a law on the books to do with this. It read in part, “any part or portion of any fruit or vegetable or other substances, which, when stepped upon by any person, is liable to cause, or does cause, him or her to slip or fall, shall be deemed guilty of a misdemeanor.” The fine for violating this law ranged between $1 and $5, which was a significant fine in the late 1800s. Even worse, one to receive between one and ten days in jail.

The law also required every vendor who sold produce to post in big letters a copy of this ordinance.

Roosevelt realized that the law was difficult to enforce but he requested that officers do their best in their attempt to do so.

This is probably a good place for a shameless plug for my new book The Flip Side of History. In there, I have included a story on the smoking of banana peels to get high. It’s a funny story and includes some of the scientific research that was done at the time, plus the concerns that lawmakers had on how to create laws to prevent the smoking of the peels.

A new accessory that buyers of Plymouth, Dodge, Chrysler, DeSoto, and Imperial vehicles – all manufactured by the Chrysler Corporation – could opt for in 1956 was the Highway Hi-Fi system.  It was a specially developed record player that was mounted in a shock-proof case that was installed just 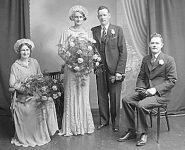 Footnote – 1902: Bride Is Her Own Grandmother

Interesting story from 1902 about a man who married the daughter of his son's wife. Just who is who in this story?

I used these in the classroom. Students love them. Wish there could be youth inclusive