Here’s a strange story about some criminals who could never be caught:  That’s because they weren’t spilling the beans, had a habit of flying the coop, and they all looked alike.

The scene of the crime was an alley on Seventh Street between Nicollet and Hennepin, behind the old Woolworth store, in Minneapolis, Minnesota. This alley was used by trucks to deliver goods to the stores and it was reported that someone had scattered nails on the pavement.  Nails plus rubber tires equal flat tires.

Luckily, the nails were swept up before any damage was done.  But the nails reappeared on the roadway. Not once or twice but five times.

It was time for the police to get involved.  Enter the investigative skills of Patrolman George Engels.  His hunch was that the nails were falling off the back of a truck.  So, he asked an elevator operator in the Woolworth building to keep an eye out to see if nails fell from any of the trucks.  None were observed.

From the article, it’s unclear if the break in the case happened to Officer Engels or the elevator operator, but one of the two was standing in the alley when they were bombarded with nails from above.

Could they have come from a window? Off of the roof? From an airplane?

Patrolman Engels offered up a solution to the problem: Simply place twigs and straw around the area so that the birds can use them to build their nests.

In early August of 1956, 22-year-old Vida Hutto took an ad out in a Houston newspaper seeking a husband. She was seeking a man who was “Fairly handsome, Protestant, dependable, likes to fish and earns at least $400 monthly.” 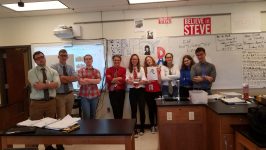