The detective took the bird back to the station and soon the parrot was a national celebrity. Viewers of a local TV show, who had tuned in solely to hear the parrot blurt out his vulgarities, were sorely disappointed to find out that the bird was not allowed to talk while on air.

Next thing you know, leaflets were circulating in the city of Duque de Caxias urging its citizens to elect the bird to be the city councilman. Election officials assured the public that any votes for an animal would automatically be disqualified, but the event did manage to provide Eleuterio with his 15-minutes of fame. 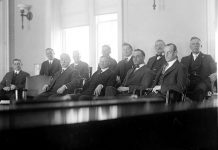