Footnote – 1937: Santa Claus Has Trouble Getting Down This Chimney

(This article originally appeared on page 1 of the December 29, 1937, publication of the Reno Evening Gazette and is reprinted word-for-word below.)

Santa Claus Has Trouble Getting Down This Chimney

The accident children always fear—that Santa Claus might get stuck

in a chimney — happened before their very eyes here last night.

Santa started down a specially built chimney at a Salvation Army home party and became wedged in the walls. He could budge neither up nor down. Frantic attendants went to his aid; finally pulled him down.

One hundred childish faces lined with dismay, broke into smiles; a very nonchalant Santa went about the business of distributing his gifts. 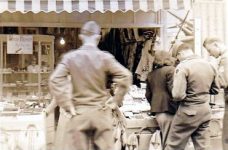 While Lieutenant Nathaniel M. Dial was dying, he asked that his class ring be given to his son. The ring was then lost. Years later, it was found.

Fred L. Markley believed that some sand that he had found contained gold. His attempt to extract the gold landing him and his two sons in the hospital.