The Honest Man with an Evil Eye – Podcast #84

Frank Greges was one of those people that never seemed to find success.  Poverty seemed to follow him throughout his entire life.

He was born in Saduwa, Lithuania, most likely in 1868.  Being a typical teenage male, he decided that there was absolutely no way that he was going to spend the rest of his life working hard on the family farm.  Instead, at age twenty, he hopped a tramp steamer to seek greater opportunity and fortunes in the United States.  Sadly, that was never to happen.

He arrived in Baltimore, Maryland, and drifted from job to job, earning very little, and each one harder than anything he would have experienced if he had stayed back in Lithuania harvesting wheat.   He worked on an oyster boat in the Chesapeake Bay, built fences around wealthy estates, and put in his time in the steel mills of Pennsylvania.

Supposedly, one night in Pittsburgh, he discovered a woman’s pocketbook lying on the dance floor.  Inside he found $60, which may not seem like a lot today, but would probably be at least $750 adjusted for inflation.  That much money would have made a huge difference in his life, but he knew that he couldn’t keep it.

“I later found a lady crying that she had lost her money.  I tell her I found money, how much did she lose?  When she said $60 I gave her the pocketbook.”

Ultimately, Frank found his way to New York.  “When a man gets broke in the other places, it is bad.  Here there is work for a man that looks for it.”

There may have been work in New York, but it paid incredibly little.  In 1937, he was working for the Bimberg Passport Photo Company, which was located on the 5th floor of a building at 62 Broad Street.  Frank’s job was to walk back and forth on the street carrying a sandwich board sign over his shoulders.  It read: Passport Photos – 3 for 35-cents – Room 500, Elevator Service.  Day after day, week after week, through whatever nasty weather Mother Nature would throw at him, he would walk up and down the street carrying that sign.  His pay was a measly $1/day for a total of $5/week.  That would be about $85/week today.  It was never enough to cover his expenses and Frank always struggled to make ends meet.

Then, on Tuesday, February 5th of 1935, as he was passing in front of the Stock Exchange on Wall Street, his foot knocked into something that was partially covered up by the newly fallen snow.  He bent down to pick it up to see if it was money, but instead it was a stack of papers.  Being uneducated, he didn’t know what he had stumbled across, but he was fairly certain that it was something of importance.

Frank’s original plan was to hold on to the papers until 4 PM when his shift ended and then go to a guard that he knew at the Stock Exchange for assistance in returning the papers to its rightful owner.

But when the guys running the newsstand took a look at what he had found, they convinced him to take immediate action.

He approached police officer John J. Grace for help.  “Johnny looked at it, and said for me to come to the police station, but I can’t go, for fear to lose my job.  Johnny took it away, and brought me the receipt.”

What no one knew at the time was that there was a frantic search on to find those papers.  They had been lost by 22-year-old Edward Stagmeier, who was a messenger delivering the documents for the Belden & Co. stock brokerage.  Frank had found the runner’s wallet which contained 18 stock certificates.  500 shares of Phillips Petroleum, 600 shares of General Electric, and 260 of DuPont.  Their value?  $42,000.  That would be over $715,000 today.  Jackpot!

But Frank was to get none of it, so he went right back to work.  He needed the money.

Within hours, word of Frank’s honestly had spread through the news wires.  He was suddenly famous.  An instant celebrity.

So how much did Belden & Co., which was located at 1 Wall Street, offer as a reward for Frank’s honesty?  Nothing.  Zilch.  Nada. They argued that the certificates were worthless because they were unsigned, but the police were quick to point out that anyone could have forged a signature on the certificates and cashed them in.  Belden insisted that if any reward was to be given, that was the responsibility of the National Surety Company, which bonded the brokerage against such a loss.

National Surety, seeing an opportunity for some good publicity, gave Frank a $75 reward, plus a guarantee of $20 per week for the remainder of the winter.  That may not sound like much, but adjusted for inflation, that would be about $1300 plus another $340/week for what would probably be another eight to ten weeks of winter.

All of the negative press that Belden had received for their stinginess finally forced them to reward Frank for his honesty.  They invited him up to their offices for lunch and then offered to put him to work for $70 per month for ninety days.  If everything went at the end of that three-month trial period, the job would be made permanent.  They then took him to get a haircut and a shave.  Then it was off to a haberdashery to get a new set of clothes, which included a tie with red dots personally chosen for him by a female reporter.

When asked what he was going to do with his newfound fame and fortune, Frank replied, “I’m not going to put any money in the market.”  He continued, “and if I’m sent out with any securities, you bet I won’t lose them.”

Frank’s old employer at the passport photo service, Abraham Bimberg, assured him that if this new job didn’t work out, he would be welcome to return to his old job.

Great rags-to-riches story so far, huh?  That’s what I thought when I came across it, but there was one article that I didn’t have when I completed writing this podcast a couple of weeks ago.  It appeared in the March 6, 1937 issue of The New Yorker and was titled “Where Are They Now?”  Knowing that my friend Bill subscribed to the New Yorker, I asked if he could get me a copy of the story just so I could add that one last sentence that told of what happened to Frank after all of the publicity died down.  Bill generously sent me a pdf of the article and I was shocked by what I had read.  Just about everything that I have told you about Frank’s honesty was totally made up by the press.

Forget snowflakes and piles of snow on the ground.  Instead, it was a clear, snowless day in New York City when Frank Greges found the wallet containing the stocks lying on the street.  And what did he do with the securities that he found?  He pocketed them.  Yup, he had every intention of keeping them.  But Frank’s act didn’t go unnoticed.  A New York Stock Exchange guard named Joseph Rachor saw him put the wallet in his coat and reported it to his superior William Rohrs, who, in turn, told patrolman Grace what had happened.  Grace then asked Frank if he had found anything, at which point the old man reluctantly handed over the wallet containing the securities.

The next day a reporter saw the police report describing Frank’s valuable find and thought that it would make a great story.  As you could guess, the reporter twisted the story all around to make Frank look like a hero who was deserving of a big reward.  Within a very short time, Frank was a national celebrity.

Both Belden & Co. and the National Surety Company were placed under great pressure by the public to provide Frank with a reward for his honest actions.  But behind the scenes, they grumbled at the idea of doing so.  After all, why should they reward a guy that had no intention of ever returning the stock certificates to them?  They were cornered with the threat of bad publicity and really had no choice but to give Frank the rewards and the job that I had previously described.

And now for the rest of the story, of which everyone seems to be in general agreement.

Everything seemed to be looking up for Frank Greges – he had money, a decent job, and new clothes – but he became unhinged on February 22nd.  First, he was observed to walk up to the door of his flophouse room, knock, and then invite himself in.  Not that big of a deal, but later in the evening he pushed a 67-year-old man named Frank Kelly down the stairs, fracturing his skull.

Around 2 AM he was walking aimlessly around the lobby of the flophouse.

Suddenly, he turned to 35-year-old Michael J. Gryzawacz and blurted out, “I am God and I’m going to kill you.  I can kill anyone who looks at me.”  Or maybe it was “I can look at a man and kill him with a look.”  Or maybe it was “I am God.  Look at me and you die.”  Well, you get the idea.  As the earlier part of this story confirmed, newspapers of the day were not known for their accuracy.

The next detail they all agree upon.  Greges gave Gryzawacz the death stare.  You know, the old evil eye.  And suddenly Gryzawacz dropped dead on the floor.  Really!

It took five officers to subdue Frank enough to get him into a straitjacket.  They first took him to the Elizabeth Street police station before calling in an ambulance to transport him over to Bellevue hospital for a psychiatric evaluation.

An initial diagnosis suggested that Frank may have had a cerebral hemorrhage which produced this bizarre behavior.  He did recover and was released from the hospital on March 23rd.  He took a taxi to a friend’s home located at 11 State Street.  The doctors recommended that he avoid stress and just plain take it easy for a while.

As for the death stare, that was pure coincidence.  Gryzawacz had been severely ill with tuberculosis and was a skeleton of a man already near death.

Ultimately, Frank was never able to hold a steady job again.  Belden & Company let him go in early May.  He secured a job that the press just loved – that of a sandwichman making real sandwiches at a restaurant – but he quickly quit that job because right after the reporters left, he was demoted to peeling potatoes in the kitchen.  He then hopped from job to job before finally going on relief, which paid him $12.40 bi-weekly, which was more than he was earning carrying signs.  What is clear from the New Yorker article was that he was clearly losing his memory, a victim of old age. 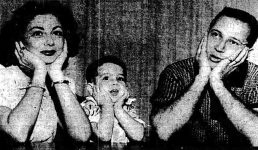 How's this for bad luck: Nathan Brown was bitten by a bee, a snake, and a bulldog all on the same day: July 6th of 1935.