Just twelve days after the wedding between Ann Ross Birdwell and Jack Marshall, the couple received word that Jack’s nephew Gene was alive and was about to be released from a prisoner-of-war camp in Japan.

The problem was that Gene was not only Jack’s nephew, but he was also Ann’s first husband. After receiving word the previous October that her husband had been killed on a flight over Borneo, she decided to marry her late husband’s uncle. Now she was in quite a pickle.

Eights days after receiving the news – on September 7, 1945 – the newlyweds had their marriage annulled by a judge in Kansas City. Ann was once again the legal wife of her first husband Staff Sergeant Gene D. Birdwell.

In 1965, Mr. & Mrs. John Ahlfeldt of Baltimore, Maryland were by their pet raccoon because a faulty fan was producing smoke. 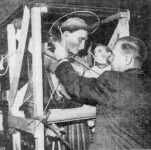 Subway riders typically leave things like umbrellas, handbags, and coats behind. In 1963, a life-size statue of St. Anthony was found on a subway platform.