It was reported on February 28, 1977, that East Hartford, Connecticut English teacher Richard P. Brimley had been in a fight with his school since 1971.

That was when his school’s principal ordered Brimley to wear a tie while teaching his classes. He was in clear violation of the school’s teacher dress code by wearing turtleneck pullovers to school each day.

His grievance was denied by the principal, superintendent, and the Board of Education. As you would expect, this tieless matter ended up in the courts.

Sixth months after this story made the national news, the United States Second Circuit Court of Appeals ruled that male teachers must follow the school’s dress code. In other words, Mr. Brimley had to wear a tie.

In 1982, the school district’s teacher dress code was modified to allow teachers who felt that informal clothing was more appropriate for his or her teaching assignment to make a special request to either the school principal or superintendent.

In general, however, the code required men to wear a jacket, tie, and dress shirt. Female teachers could wear a skirt, dress, slacks, blouse, or sweater. They could no longer wear pantsuits, which had been previously allowed. 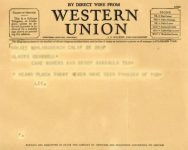 The day corsets were arrested, a university lingerie auction, US Customs bans Alice Cooper’s panties, a fish who milked a cow, a box of cookies that started a fire, the highest-paid act at Woodstock, and more!