May 9, 1967, where it was reported that New York City Criminal Court Judge Milton Shalleck handed down a ruling in the case of 28-year-old Charlotte Moorman.  She was found guilty of performing a lewd act because she played her cello topless in a theater performance on February 9th.

In his 20-page opinion, the judge wrote “The pristine beauty of human female breasts has been immortalized by painters and sculptors and writers of poetry and prose. In the literary arts, too, the descriptive allusions to the fullness of the female figure conjure up the image of its beauty.”

He continued “but no poem, in no prose respected by the test of time, have I read, and no valued oil, in no statue or bust have I seen, either visually described or portrayed, a picture of a nude or topless cellist in the act of playing the instrument. I wonder if anyone has.”

He goes on, but you get the idea. If you play the cello, keep your clothes on. Ms. Moorman received a suspended sentence because the judge found her to be “weak and immature.”

A man told police that he had witnessed someone being murdered. Investigators raced to the scene, saw the blood, and then discovered a very unusual corpse. 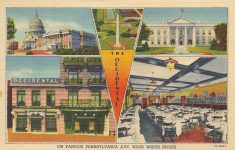 In 1964 waiter Herbert A. Talmud was accused of poisoning the food of customers at the Occidental Restaurant in Washington, DC.