In late February of 1964, Daniel Price, the manager of the Occidental Restaurant in Washington, DC received several complaints from customers who had become violently ill after eating a meal there.

He investigated and determined that each of the patrons had been served by the same waiter, 23-year-old Herbert A. Talmud.

That’s when Talmud offered him five packages of a powder that he said he had put in Ms. Moran’s teas for $1.00.

Unbeknownst to Talmud, the manager Price had already contacted the police. They instructed bookkeeper Hughlett to buy the packs, which he d30id.

Analysis of the powder determined that it was an emetic that induced violent vomiting and that an overdose could be fatal. Talmud was arrested and charged with assaulting Simone Moran with poison.

Not surprisingly, it was discovered that Talmud had been dismissed by the previous two restaurants that he had worked in after they received complaints from customers of being ill.

Talmud underwent a twenty-day psychiatric evaluation and was found to be “of sound mind.” He was sentenced to 90-days in prison or a $200 fine. 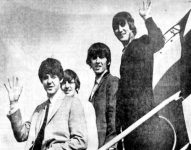 Early Criticism of The Beatles

Not everyone loved The Beatles. Here are three early criticisms of their music from the newspapers of the time.

Everyone knows that Santa comes down the chimney to deliver his gifts. Sometimes he gets stuck...