Wrote Will on Petticoat

On March 14, 1925, 86-year-old George W. Hazeltine was lying on his death bed in a Los Angeles rest home and wished to write his will. With few breaths remaining and no paper readily available, one of the nurses offered up her petticoat. On it, he left $10,000 to Lillian Pelkey, nurse and owner of the rest home, $10,000 to his nurse Madaline Higgins, and the remainder to his great grand-niece, Lorraine Moody Richmond. He then signed and dated the petticoat and the two nurses signed as witnesses.

Hazeltine had been known as the “pauper of North Broadway” because he lived in a one-room shack and collected all types of junk. To everyone’s surprise, his estate was estimated to be worth $500,000 (approximately $7.5 million today).

What was also interesting was that George did already have a formal will drawn up. In it, the bulk of his estate was to be left to his two attorneys, $10,000 to Pamona College, a large sum to the YMCA and YWCA, plus various sums to a number of other people and organizations.

It didn’t take long for the case to end up in court. There were ten different parties that wished to have the petticoat will declared invalid on the assumption that Hazeltine was feeble and infirm at the time he had penned it. They all wished to have the formal will recognized as his true wishes, which, of course, was of great financial benefit to all of them.

Challenges to the petticoat will made their way up to the California Supreme Court where on April 2, 1927, the court ruled that the petticoat will was George Hazeltine’s valid will. The $10,000 left to his two nurses was invalidated because one cannot be both a beneficiary and a witness at the same time. As a result, his entire fortune went to his 35-year-old great grand-niece Loraine Moody Richmond. 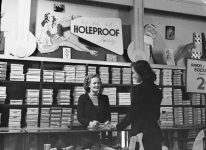 In 1946, Gotham Hosiery introduced sheer nylon pantyhose with fake tattoos printed on them, allowing women to get tattoos without the ink.