(This Footnote to History article was printed on page 39 in the October 13, 1960 edition of the Cincinnati Enquirer, and is reprinted word-for-word below.)

One of the cards was from Mrs. Wessinger’s aunt, Mrs. Anna Zink, of Alpena, Mich. Mrs. Zink died 11 years ago.

Another was from Wes­singer’s parents, Mr. and Mrs. Joseph Wessinger, of Milford, Mich. Joseph Wes­singer died five years ago.

A letter from one of Mrs. Wessinger’s friends said she was going to stop teach­ing because she was ex­pecting a baby. “That baby, Laren, now is in the Marine Corps,” Mrs. Wes­singer said.

The woman also inquired about Mrs. Wessinger’s new baby girl, Martha, who 20 years later is employed as a secretary.

Postal officials were un­able to explain why the mall was detained. 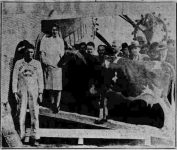 Wrote Will on Petticoat

In 1925, George W. Hazeltine was near death and wrote his will on the petticoat of one of his nurses. Would it hold up in court?