(This article originally appeared on page 27 of the July 27, 1899 publication of the Tri-States Union and is reprinted word-for-word below.)

The barn on the farm of Thomas Lee at the reservoir, Middletown, was struck by lightning but did not take fire.

At Howells, four miles west of Middletown, there was not a sprinkle.

For a while it seemed like Dumpy the Dog could survive just about anything, but a puppy-hood illness came back to haunt him. Be sure to check out this incredible true story. 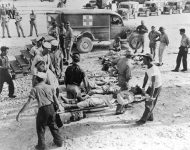 The sinking of the USS Indianapolis caused the worst at-sea loss of life in the history of the US Navy. Hundreds of lives could have been saved if the US Navy had not forgotten about the ship.