Muriel Nicholson, whose husband operated a New York City car dealership, filed applications with the State Motor Vehicle Bureau to register three different automobiles. Each time she used a different birth date. One said that she was born on September 6, 1914, a second listed her birth date as September 26, 1915, and the last indicated a date of September 6, 1918.

As a result of her deception, she was charged with three counts of falsifying data. If guilty, Mrs. Nicholson could have received a $500 fine ($4,700 today), one year in jail, or both.

On May 12, 1954, Mrs. Nicholson arrived at the Court of Special Sessions dressed in a gray suit with a fur collar, a pearl necklace and earrings, a black ribbon in her blonde hair, and a short black veil.

After considering the facts in the case, the three judges unanimously dismissed the charges against Mrs. Nicholson.

“We are unwilling to believe that such penalties were intended for one who only exaggerated her age between three and four years,” Justice Herman Hoffman stated. He added that “…the age element is only important as requiring proof from an applicant that she is not a minor.”

“It may be observed, in passing, that the courts are not unmindful that age – as far as our sisters are concerned – is singularly relative, and gallantry exacts an appreciation and understanding of our lady’s age as one of the most gracious in men.”

As for her real age, Mrs. Nicholson never revealed this detail in the courtroom. She did state, late on the evening of the decision, that she had been born in 1916.

Eleven days later, Mrs. Nicholson’s fame would bring her misfortune. Shortly after midnight on May 23, 1954, two bandits brandishing pistols entered the lobby of her apartment building at 10 East Eighty-fifth Street and demanded that the doorman take them to her apartment. Upon entering her sixth-floor apartment, the thugs tied up Mr. and Mrs. Nicholson, the doorman, and a maid. The telephone was ripped from the wall and at least $50 in cash and jewelry was stolen. The Nicholsons were able to free themselves and contacted the police. 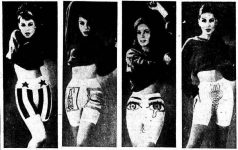 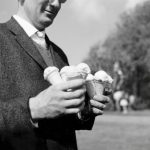