During her one-week search, she had rejected about fifteen men from Alabama and Florida but was interested in another from Texas.

On Sunday, April 1, 1951, officer Carl Hamm pulled over a car in Milwaukee. The man identified himself as Elmer Urban, but he was clearly lying... 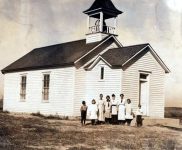 Women with Children Banned from Teaching

In 1911, the New York City Board of Education banned women with small children from teaching in the classroom.