On November 29, 1918, it was reported from The Hague in Holland that an unnamed Austrian doctor had discovered that beets, the root vegetable, was both an effective preventative and treatment for influenza. Supposedly, he had given his patients a plateful of beet salad just as a fever began to set in and the fever was reduced.

As word of this simple elixir began to spread, the demand for beets in Holland skyrocketed, causing the price per beet to increase tenfold. 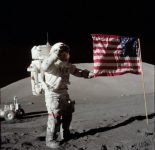 A story for those that buy into the whole NASA conspiracy-you know-that man never stepped foot on the moon. This is sure to add some more fuel to that fire.

It's really true! Florence Hill of Denver, Colorado swallowed a live mouse back in 1959.

Beets have recently been recognized as a superfood.