Imagine this: On December 29, 1921, the Brookside Methodist church in Birmingham, Alabama was fully decorated for the wedding of schoolteacher Icie Williams to contractor Neal Jay.  The invitations had been sent out and everything was all set for their big day. The Reverend John Clifton Draper was to officiate.

But the wedding was not to be.  At least not that wedding.  That’s because, at the eleventh hour, Miss Williams realized that she loved Reverend Draper more than she did her fiancé. Not only that but the 25-year-old Reverend Draper confessed his desire to marry 21-year-old Icie.

So, the two sent a telegram to Neal, who was working in North Carolina at the time, to let him know that the wedding was off. Now that Neal was history, the two wasted no time.  They obtained a marriage license and were immediately wed.

But there was one big problem: Neal Jay never received the telegram.  He was already en route to the wedding rehearsal.  Imagine his surprise when he arrived to find out that his girl had married someone else. Yet, he took it graciously and wished the newlyweds much happiness before returning to North Carolina.

While I was unable to locate further information on the groom dumped-at-the-alter Neal Jay, the Drapers would go on to have two children – Virginia and John Jr – and would remain married until the Reverend passed away on February 9, 1966, at 70 years of age.  Icie lived until January 18, 1991, passing away at 90-years-old. 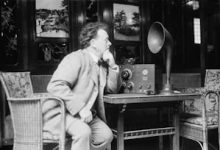 A man showed up in Cape Charles, VA speaking a language that no one could understand. Immigration officials came up with a novel way to find someone who could speak to him.

In early August of 1956, 22-year-old Vida Hutto took an ad out in a Houston newspaper seeking a husband. She was seeking a man who was “Fairly handsome, Protestant, dependable, likes to fish and earns at least $400 monthly.”