Back in 1921, New York City resident, Etta Caulfield decided to dress up as a man for Halloween. She borrowed her brother’s shirt, tall-stiff detachable collar, pants, and an overcoat to complete the costume.

As she set out along Broadway en route to a Halloween Party, men started to follow her and a crowd soon gathered. Shortly after that, a patrolman was summoned and he arrested Ms. Caulfield on the spot. It’s unclear what the charges were, but she was released the next day after spending a night under the supervision of a police matron.

The Case of the Hollow Nickel – Podcast #168

In 1953, paperboy Jimmy Bozart was counting his subscription money. He dropped the coins and one nickel split open, revealing a piece of microfilm. This led to the arrest of a high-ranking Soviet spy. 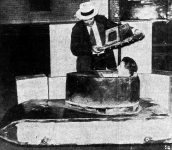 The fascinating true story of three Milwaukee men that started bombing Milwaukee Sears stores in an effort to obtain $100,000 and escape in their homemade submarine.