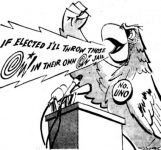 All Mrs. Delia Hagen of Los Angeles wanted for Christmas was a new roof, but she could not afford it.