On December 6, 1954, the NY Times ran a story describing a brand new invention that could cook an 18-pound roast of beef in twenty minutes, a chicken in 9, an apple pie in 6, and could heat up a steak in one minute.

This new cooking machine was to be marketed as the Radarange and used microwaves to heat up the food. While nearly everyone today owns a microwave oven, the initial high cost of these models was sure to keep the average buyer away. A table model was to sell for $1,875 ($16,700 today) and a wall model was to be priced at $2,975 ($26,500 today). Appliance manufacturer Tappan was in the testing phase of this newfangled contraption and estimated that they would have a home version on the market in the year to come.

I did a quick check and apparently, only thirty-four microwave ovens were sold in 1955, the first full year that they were on sale. When production was discontinued in 1964, a grand total of 1,396 units had been purchased. It wasn’t until the price significantly dropped and the ovens made more compact that sales started to take off.

Year after year, Mr. and Mrs. Leo M. Dooley of Akron, Ohio would receive a Christmas card but had no clue who was sending it. The mystery was finally solved... 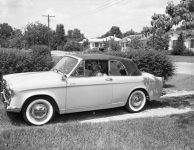