(This article originally appeared on page 40 of the April 9, 1928 publication of Time magazine and is reprinted word-for-word below.)

Mathias Blau of Chicago persuaded his wife, Helen, to have all her teeth pulled. Then he refused to buy her false teeth because, he said, it was cheaper to feed her on soup than on solids. Mrs. Blau went to court, was awarded two sets of store teeth and at least a beefsteak a week. Judge Jonas told Mr. Blau that he had committed “the meanest trick” he had ever heard of.

One of the best stories ever covered on this podcast. It's the story of two men placed on trial for murder and were saved from almost certain death by an event that occurred many miles away. 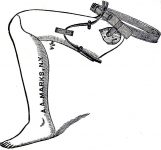