(This article originally appeared on page 2 of the February 11, 1950, publication of the Baltimore Sun and is reprinted word-for-word below.)

The little German schnauzer’s barking when he became sick aroused some of the residents of a 72-room, one-story frame type wartime dormitory. They discovered carbon monoxide fumes in the building.

Only eighteen men were hospitalized and seven of those were released this afternoon. Hospital officials said the condition of the eleven was “very good.”

University officials said the gas seeped through the building on a back draft created by a combination of wind and open doors.

How's this for bad luck: Nathan Brown was bitten by a bee, a snake, and a bulldog all on the same day: July 6th of 1935. 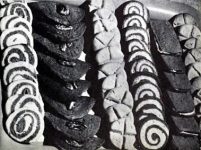 A story in the December 13, 1949 issue of the Honolulu Star-Bulletin describes how a box of cookies started a house fire.