On June 3, 1954, in a game being held in Milwaukee, Wisconsin between the Brooklyn Dodgers and the Milwaukee Braves, an umpire threw the legendary Jackie Robinson out of the game after Robinson argued over what he considered to be a bad call.

Robinson walked off the field and threw his bat toward the dugout.  The bat flew a bit too high and bounced off the top of the dugout and into the crowd, hitting three spectators in the head.

Two of the fans, Mr. and Mrs. Peter Wolinsky threatened a lawsuit.  Robinson was very apologetic and explained, “When I threw the bat underhanded toward the dugout, I held it a second too long and it went too high and bounced into the stands.”  He added, “I didn’t mean to throw the bat into the stands.  Hell, I’d be crazy to do that.”

As you would expect, the case ended up in court.  The couple filed a $40,000 (about $320,000 today) suit against Robinson and the Brooklyn Dodgers.  Mr. Wolinsky claimed to suffer from a brain concussion and headaches.  Both he and his wife were suffering from severe nervous shock.

So severe were their injuries that the case was ultimately settled out of court for a reported $300 each. 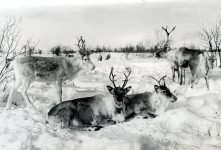 In 1954, 2-year-old Richard Ferris decided to let a reindeer take a lick from his lollipop. That was a mistake...

On June 3, 1952, Mrs. June Rivers discovered that the man that she had been intimate with was not her husband. William Williams was accused of raping her.