On January 22, 1958 thieves in New York City stole a tractor-trailer loaded with $22,000 worth of green coffee.  (That would be about $175,000 today.) They drove the truck to another garage at 564 Carroll Street and unloaded the coffee.  What they didn’t anticipate was that in removing all of that weight, the truck’s body would rise higher than the garage door through which it had entered.

You can see where this is going…

When the driver tried to drive the truck out of the garage, he tore sections of the front wall right off of the building.  Residents heard the thunderous crash and called the police.  They arrived to find the thieves long gone, but 325 bags of coffee had been stacked neatly inside the garage and the truck was covered in debris with a high beam resting against one of its sides.  The tires of the truck had been deflated, suggesting to the police that the thieves had made one last attempt to get the vehicle out of its conspicuous location.

The truck was reloaded with the coffee and easily drove back out through the garage door.

The true story of Karl von Cosel and the girl of his dreams. They slept together in the same bed every night - nine years after she had died. 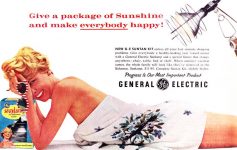 In 1927, “Sunbath tea parties” were the latest fad sweeping London. Guests would sit under ultraviolet lamps and drink tea.