One would expect many things to be left behind by riders on New York City’s subways: cell phones, umbrellas, coats and similar items. Imagine the surprise of transit workers when they found a life-size statue of St. Anthony holding the Christ child in his arms abandoned on the mezzanine level of the East Broadway station of the IND Sixth Avenue Line on Christmas Eve of 1963. There the brown plaster statue sat in its crate, standing 6 feet (1.83 m) tall and weighing in at a whopping 250 pounds (113.4 kg). With no one there to claim it, the statue was hauled off to the Transit Authority’s lost and found department at 370 Jay Street.

Two days later, a Haitian man named Etienne Agnan walked in to claim the statue. Agnan, who had moved to New York City four months prior, explained that he had done some statue work for St. Teresa’s church on the corner of Rutgers and Henry streets. For his efforts, church officials rewarded Agnan with the statue of St. Anthony, which he planned to take to upper Manhattan for some repair work before shipping it off to Haiti.

So, Agnan lugged the massive statue into the subway but soon realized that there was no way that he could easily get it onto the train. He opted to leave the statue on the mezzanine level while he ran upstairs to seek outside transportation. By the time he returned, subway workers had already hauled the statue off to the lost and found.

Personally, I think it would’ve opted for a U-Haul instead. 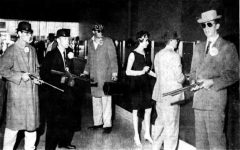 Six students from the Santa Rosa Junior College found themselves in hot water in 1960. They dressed up in roaring ‘20’s clothes and decided to rob a bank... 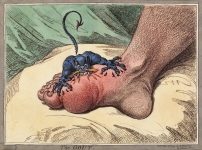